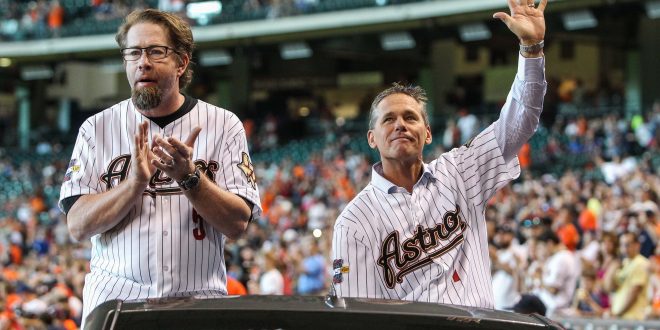 Former Houston Astros first baseman Jeff Bagwell has been selected to the Baseball Hall of Fame Class of 2017.

Jeff Bagwell's results in the HOF voting over the years:

Bagwell was drafted  by the Boston Red Sox but was traded and began his career with the Houston Astros. Over Bagwell’s career he earned multiple awards and has filled the stat sheet with the Astros. When entering the league in 1991, he earned the National League Rookie of the Year. In 1994, he earned numerous awards such as NL MVP, Gold Glove Award, NL RBI leader, Silver Slugger Award as well as in 1997 and 1999, and was an All-Star in 1996, 1997, and 1999.

An all-around performer, @astros legend Jeff Bagwell is one of 14 players to hit 400 homers and steal 200 bases. #HOF2017 pic.twitter.com/JIZYqNmCSx

After retiring from baseball, Bagwell went on and had short stints as a hitting coach and guest instructor with the Astros organization.

It has taken a long time for Bagwell to get inducted due to him playing during the steroid era and hitting so well.  Bagwell will be inducted on July 30 along with Rodriguez and Raines at Cooperstown.