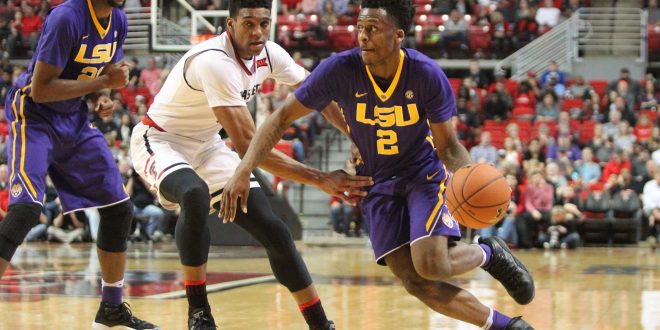 The LSU Tigers will be in for a battle tonight when they host the South Carolina Gamecocks in Baton Rouge. These two teams have had quite different seasons; the Gamecocks have only lost four games, while the Tigers are currently on a seven game losing streak. LSU will look to turn things around as they face off against No. 19 South Carolina tonight.

LSU is stuck in a downward spiral, having lost the aforementioned seven games in a row. The Tigers have a record of 9-11, and are just 1-7 in the SEC. Taking on No. 19 ranked South Carolina will be no easy task. This SEC matchup is just the beginning of a tough stretch in the schedule for LSU. The Tigers will take on Texas A&M and Kentucky all within the next week.

The Gamecock defense is a key factor in the team’s success thus far this season. They are the best in the nation when it comes to 3-point field goal defense, and rank highly in a number of other defensive stats. While their defense may be their strongest asset, their offense should not be overlooked.  Seniors Sindarius Tornwell and Duane Notice are major threats to LSU’s defense.

LSU fans should look out for senior Sindarius Thornwell and sophomore PJ Dozier. Thornwell averages 19.3 points per game and has been a leader for this South Carolina team. Dozier has been averaging just short of 14 points per game, and has been a consistent player in their lineup. South Carolina fans need to keep an eye on sophomore Antonio Blakeney. Blakeney scored 23 points for the Tigers last week against Texas Tech.

Tonight’s game will be in Baton Rouge. Tipoff is set for 8 p.m.

Born and raised at the ballpark! Typically quiet- until it comes to sports. I'm a South Florida native with a passion for baseball nearly as strong as my faith. Grew up in garnet + gold, turned out sporting orange + blue. Likely to be found with a camera. And yes, I take food pictures.
@victoriarossman
Previous Florida Continues to Add Strong Recruits
Next Nick Saban, Urban Meyer Are Dominating Florida Recruiting