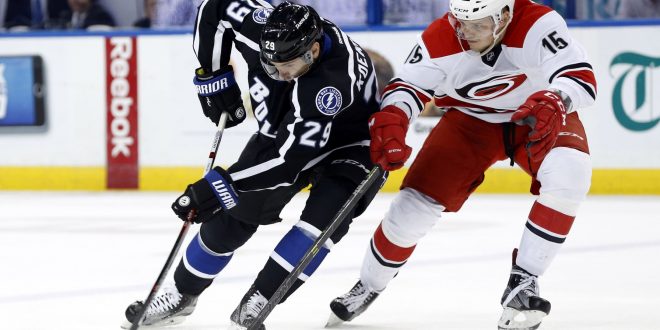 Tampa Bay Lightning Stays Busy On and Off the Ice

The Tampa Bay Lightning were active in both the NHL trade deadline and on the ice last night. Lightning’s goaltender Ben Bishop was traded to the Los Angeles Kings for Erik Cernak and the team beat the Carolina Hurricanes in overtime, 4-3.

Ben Bishop has been traded for Erik Cernak and will now play for the Los Angeles Kings. Bishop is coming off with a career-best 2.06 goals against average and a .926 save percentage.

However, Bishop’s injuries may have been a reason for his trade. His postseason was cut short and Andrei Vasilevskiy had to step in and play for his absence.

Jay McClement then tied the game with 2:37 left on Carolina’s seventh short-handed goal of the season.

It was Tampa Bay’s Victor Hedman who scored the game winning goal only 46 seconds into overtime. This was his second goal of the night.

Hedman talks about trying to play a game after losing three teammates in trade.

The Lightning will be back in action tomorrow night when they take on the Pittsburgh Penguins. Meanwhile, the Carolina Hurricanes will play against the Arizona Coyotes tomorrow and on Sunday.