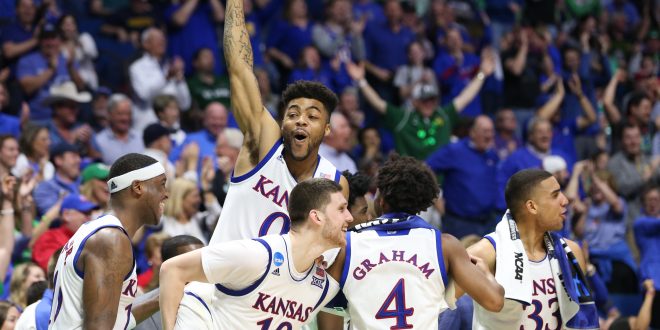 NCAA Tournament: Dancing Into the Sweet 16

Big name programs like Kentucky, Kansas, Gonzaga, and North Carolina face off against opponents looking to make their own history and add to the chaos that March Madness is known for. The upcoming Round of 16 will feature impressive matchups with every team gunning for another round in the coveted Big Dance.

The #Sweet16 is set! #MarchMadness pic.twitter.com/7Kle0wOQwz

The first game of the Sweet 16 tips off at 7:09 p.m. on CBS between No. 7 seed Michigan and No. 3 seed Oregon. The Wolverines are riding high after a big win against Rick Pitino and the Louisville Cardinals in the Round of 32, while Oregon has yet to play a team better ranked than a No. 11 seed.

The No. 1 seed Kansas Jayhawks and Gonzaga Bulldogs will play a pair of No. 4 seeds in Purdue and West Virginia, respectively. If either of the No. 1 seeds go down then we all should throw away our brackets. (If you haven’t already)

A late tipoff at 10:09 p.m. between No. 11 seed Xavier and No. 2 seed Arizona rounds out Thursday’s action. Xavier is the highest seed left in the tournament, but are a team that has the capability of running their opponents out of an arena… cc: Florida State.

Beginning the drama on Friday will be No. 4 seed Butler and No. 1 seed North Carolina. Butler are looking to repeat the success they had in 2011 when they defeated a No.1 seed (Pittsburgh) and a No.2 seed (Florida) on their way to the National Championship. The winner of this game has a tough road ahead of them as they will play the winner of Kentucky and UCLA in the Elite Eight.

The first of three SEC teams competing in the Sweet 16 is No. 7 seed South Carolina who takes on No. 3 seed Baylor. Riding the wave of their big upset victory against Duke, the Gamecocks are the furthest they’ve ever gone at the NCAA Tournament. Sindarius Thornwell is the playmaker to watch for South Carolina. Thornwell has played a minimum of 35 minutes in both of the games leading up to this one, and has 53 points so far in the tournament.

A showdown between top talented freshmen is the third bout of the Friday lineup. No. 2 seed Kentucky plays No. 3 seed UCLA with freshman Malik Monk leading the Wildcats and freshman Lonzo Ball leading the Bruins. Monk has struggled so far in the tournament, going 6-22 from the field. There’s a totally different tune for Ball though, going 13-17 from the field and 6-10 from beyond the arc.

The last of the SEC schools competing in the Round of 16 will be when No. 4 seed Florida take on the No. 8 seed Wisconsin. The Gators are relying on their depth to carry the load as playmaker KeVaughn Allen continues his shooting slump. Players such as Devin Robinson and Justin Leon have already made a splash in the Tournament with their impressive performances. The Badgers are wanting to continue their momentum after knocking off No. 1 seed Villanova with strong guard play by their senior leader, Bronson Koenig.

Originally from Ocala, Florida. University of Florida Class of 2017. Avid FIFA player willing to beat anybody. Follow me on Twitter for everything you need to know!
@JoshLaSelva
Previous Xavier Looking For Another Upset As They Face Arizona
Next NCAA Tournament: Sweet 16 Gonzaga Vs. West Virginia Preview