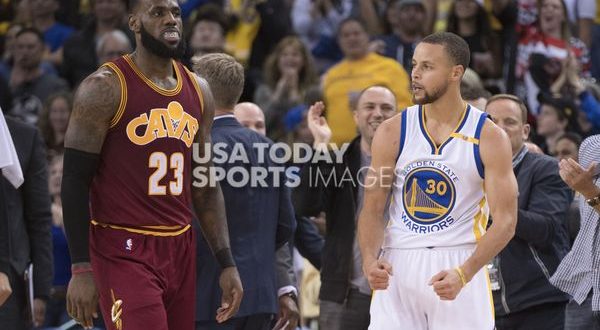 After a long and arduous regular season, it’s officially the start of the best time of the year: the NBA Playoffs. While most people expect a Warriors/Cavaliers final for the third straight year, there’s no guarantee. The Cavaliers have been cold, losing four straight games to end the year and 14 of their final 24 games. The Warriors have had another dominant season, but Kevin Durant missed 19 of their last 22 games and the top of the Western Conference is loaded in terms of talent and chemistry.

The 2016-2017 NBA regular season was a season for the ages. Let’s rattle off a few of the records that were broken.

It’s safe to say that this was a defining season for the future of the NBA.

The Cleveland Cavaliers were pinned as the Eastern Conference favorites from day one, and even as the two seed, they still are. The Celtics and Raptors can definitely give the Cavs a run for their money, but Boston (53-29) is the weakest one seed since the Pistons won 50 games in 2002-2003.

These two squads split the four games they played in the regular season. Chicago is the best offensive rebounding team in the league, which always poses major problems for the undersized Celtics. While Danny Ainge might have regrets about not acquiring Jimmy Butler at the trade deadline, Boston’s fast-paced style of play, elite spacing and ball movement should be enough to get them past Chicago.

Anyone who remembers the double overtime game between the Cavs and Pacers two weeks ago should be expecting a fantastic series. However, LeBron in the postseason is a different specimen than LeBron in the regular season. Any team with Paul George needs to be respected, and rightfully so. George is more than ready for the challenge of the Cavs. Just remember that LeBron has made the finals five out of five times while being the second seed.

The Milwaukee Bucks will be a top four team in the East next year. They have one of the best players in the game in Antetokounmpo, a lot of young, developing talent in players like Thon Maker, Malcolm Brogdon, and Khris Middleton, and lost their second best player for the year in Jabari Parker. However, the Raptors are too experienced and it’s not likely that the Bucks will be able to tame the dynamic trio of Kyle Lowry, DeMar DeRozan, and Serge Ibaka.

This series could truly go either way. Washington took three out of four in their season series, but the Hawks are a very hot and cold team. The backcourt of John Wall and Bradley Beal has turned into arguably the best backcourt duo in the Association not named Curry and Thompson. While the Hawks don’t have any superstars, their winning culture and team-first mentality has led them to the playoffs in ten straight seasons.

The top of the Western Conference is absolutely loaded. The Warriors, Spurs and Rockets all would have been the top seed in the Eastern Conference. However, these first round matchups won’t be easy for these top-notch teams.

One of the records that I didn’t include earlier was that Golden State is the first team in history to win 63+ games in three straight seasons. What’s crazy is that Golden State has actually won 67+ games in three straight seasons. This is no fluke. The Blazers have a dominant back court in Damian Lillard and C.J. McCollum, but they stand no chance against far-and-away, the most talented team in the league.

The Spurs are a machine. They have made the playoffs in 20 straight years, and don’t seem to be slowing down any time soon. However, the Grizzlies play the Spurs very well. Memphis is an extremely physical team with an overwhelming veteran presence, which always bodes well in a playoff series. I don’t expect the Grizzlies to win the series, but I certainly expect them to slow the machine down.

The two major MVP candidates, Russell Westbrook and James Harden, will face off head to head in the most anticipated first round series. This should be a very high scoring series with two high-octane offenses. While the winner of this Harden/Westbrook battle doesn’t guarantee the MVP trophy, it certainly might end up being that way.

These two teams have been swapping the four and five seed all year long. The Clippers have one of the best big/little duos in the game in Chris Paul and Blake Griffin, but the Jazz have arguably the best up-and-coming center in Rudy Gobert and a legitimate star in Gordon Hayward. Home court will definitely play a huge factor in this series, but it could truly go either way.

Who's ready for #NBAPlayoffs?!?! pic.twitter.com/d4EfDxnY8C

Previous NFL Draft Preview: First Round Predictions
Next Gators in the NFL Draft