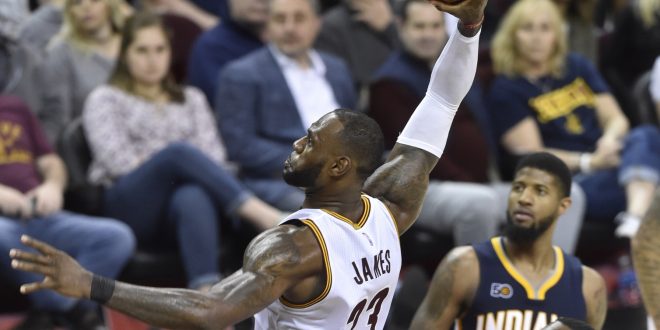 The NBA regular season has officially come to a close but the playoffs are just about to kick off this weekend. For the first time since LeBron’s second stint in Cleveland the Cavs are not the number 1 seed in the Eastern Conference. That distinction belongs to the Boston Celtics who take on the 8th seeded Chicago Bulls on Sunday. As the 2nd seed in the Eastern Conference, the Cavaliers take the 7th seed the Indiana Pacers.  A team LeBron is very familiar with, having battled Paul George and the Pacers in the playoffs as a member of the Miami Heat. Cleveland won the regular season series 3-1 with the most recent matchup coming in a 135-130 double overtime victory for Cleveland. Going into the matchup the Cavilers have lost 4 straight while the Pacers have won 5 straight.

The Cavaliers struggles during the regular season have been well documented. Still, LeBron and company managed to finish the season with a 51-31 record and the 2nd seed in the Eastern Conference. Going into the playoffs the Cavaliers are healthy for the first time in years which is critical if they want to repeat as NBA Champions. LeBron James once again put in MVP like season averaging 26.4 PPG, 8.6 RPG and 8.7 APG. James will look to use his previous experience against the likes of Paul George and Lance Stephenson in the matchup. Considered the hero for the Cavs last year during the playoffs, Kyrie Irving put in his best statistical season of this career averaging 25.2 PPG and 5.8 APG. Irving will look to replicate his regular season success against the Pacers. The often forgotten but highly effective Kevin Love put in a solid season for the Cavs as well. Love averaged 19 PPG and 11.1 RPG and will look to wreak havoc on the Pacers interior defense.

In Nate McMillians first year as head coach for the Indiana, the Pacers finished with a 42-40 record earning them the 7th seed in the Eastern Conference. Despite dealing with the rumors of a potential trade or signing with another team star foreword Paul George stayed the course and put in a stellar season for the Pacers. George averaged 23.7 PPG, 6.6 RPG and 3.3 APG during the regular season and will look to take it to the next level against the Cavs. Another player with experience against the Cavs is journeyman guard Lance Stephenson. Since leaving the Pacers “Born Ready” has bounced around several NBA teams the last few years before finally coming back to the Pacers toward the tail end of this season. Stephenson will look to make an impact on both sides of the floor against the Cavs. In Jeff Teague’s first year as a Pacer the point guard the former Atlanta Hawk eventually adjusted to Indiana’s up tempo offense averaging 15.3 PPG and 7.8 APG during the regular season. Teague hope to have similar success in this weekends playoff series against the Cavs.

Paul George on facing the Cavs:

Game 1 of the Cleveland Indiana series is scheduled for tomorrow at 3:00 PM and can be seen on ABC.