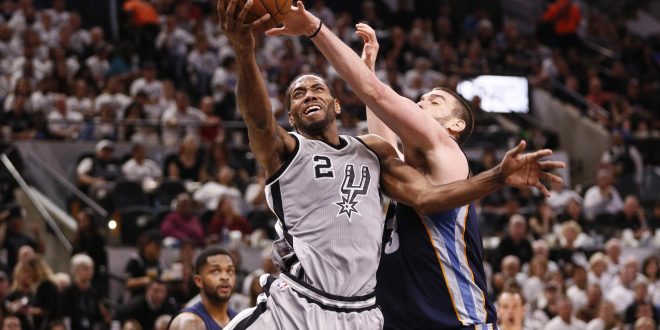 Tying a playoff career high in game one just wasn’t enough for Kawhi Leonard. Last night, Leonard went off for 37 points, setting a new playoff career high on only 14 shot attempts. The story behind Leonard’s career night was his efforts at the charity stripe. He shot 19 free throws in last night’s game and didn’t miss a single one.

Leonard is a perfect 28-28 from the charity stripe, and Spurs Head Coach Greg Popovich praised Leonard for his ability to get to the line and convert at such a consistent clip.

To add to Leonard’s night, he became the second player since 2008 to score 35 points while grabbing ten rebounds, joining the big fundamental himself, Tim Duncan.

Unlike game one, the Grizzlies got off to a slow start. The Spurs dominated the first quarter and took a 13 point lead into the second. Marc Gasol propelled the Grizzlies in game one, but he couldn’t get much to drop for him last night. Gasol would start off the game missing his first six shots, and finished with only four made.

In the second quarter, the Spurs would continue to increase their lead. They would go up by as many as 26 before the Grizzlies managed to cut it down to 19 at the break. The Spurs held Memphis to 33 percent shooting during the first half, while the big three of Leonard, Aldridge, and Parker combined for 39 points in the half.

One of the stories in this one was the chippy play of 40 year old Vince Carter. Kyle Anderson appeared to trip Carter during the second quarter, which is bound to upset any player. But when your team is getting blown out, tensions are bound to flare.

Second Half – Memphis Climbs Back

This is where the game got interesting. The Grizzlies narrowed the gap to 10 points at the end of the third quarter after a beautiful step-back three right before the buzzer. Memphis held San Antonio to 19 third quarter points In the fourth, the Grizzlies would pick up the pace.

At the 10:08 mark in the fourth, Marc Gasol would finish at the basket while getting fouled. Gasol would hit the freebee to bring the game within four. And With just a five-point lead with 6:42 remaining in the game, Popovich had seen enough.

San Antonio would start their fourth quarter run with a Danny Green three pointer, followed by a fast-break layup for Leonard and a Pau Gasol three. With the Spurs now up ten, there was no turning back from this point. The Spurs would go on to win 96-82 to take a 2-0 series lead over the Grizzlies.

The Grizzlies got strong performances from Mike Conley and Zach Randolph, but their efforts weren’t enough. Memphis is still without their best perimeter defender in Tony Allen, who isn’t expected to return for the remainder of the series.

As a team, the Grizzlies shot a total of 15 free throws between three players. Kawhi Leonard himself took 19 free throws. This is bound to frusturate any coach, but David Fizdale took it personally. In his first year as a head coach, Fizdale felt disrespected by the refs, saying that his rookie head coaching status played into the officiating. Not only did Fizdale believe his coaching experience played into the officiating, but he also believed the Spurs just get more respect as a team due to their championship history, and more notable players on their roster.

Fizdale is bound to receive a fine from the NBA for criticizing the officials, but his opinions speak volume. You can hear the short version of his post-game interview here.