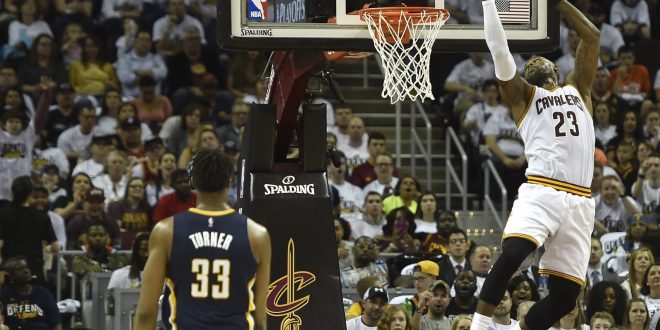 Cleveland’s “Big 3” combined for 89 points as the Cavaliers downed the Indiana Pacers 117-111 Monday night to take a 2-0 series lead.

The game got off to a sloppy start for the Cavs.  The Pacers struggled defending the pick and roll in game one, and came in with a plan to high trap the Cavs’ pick and roll in game 2.  The high trap led to three quick turnovers from LeBron James and Kyrie Irving.  After an early timeout, the Cavaliers countered by placing a weak-side ball-handler on the wing for an outlet and attacking the defense before the trap could be set up.

The Cavaliers shredded Indiana’s defense, shooting 55 percent from the field and 42 percent from distance.  James was terrific driving to the rim and using his excellent court vision to find openings for his teammates.

Paul George put on a show for Indiana, scoring 32 and having several poster dunks in the losing effort.  Myles Turner was near absent in the game, scoring just 6 points on 3-10 shooting. The 6-11 center also secured just five boards in the loss.

The Cavaliers clamped down on defense in the 3rd Quarter, holding the Pacers to just 20 points.

Cleveland nearly squandered another double-digit fourth quarter lead as the game was trimmed to four with less than 20 seconds in regulation.  Cleveland entered the fourth quarter with an 18-point lead.

James applauded his team’s play following the win to move the series to 2-0 as the teams head to Bankers Life Fieldhouse in Indiana.

James (25 points), Kyrie Irving (37 points), and Kevin Love (27 points) combined for the most points they’ve ever had in a postseason game together (89 points).

It was also the first time three Cleveland teammates all scored 25 or more in a playoff game.