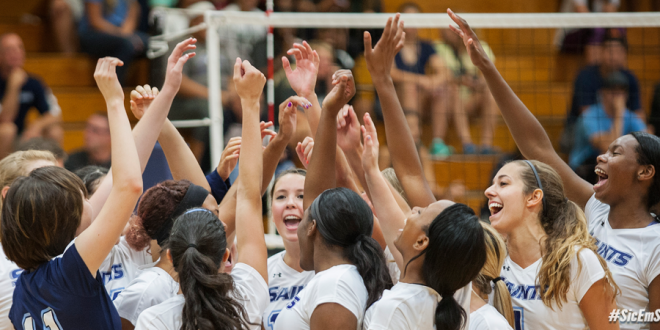 After making it to the National Junior College Semi-Finals last year, the Santa Fe Saints women’s Volleyball have just begun what’s shaping up to be a tough 2017 schedule. The Saints finished the 2016 season ranked 4th in the NJCAA Tournament and were preseason ranked #16th for the 2017 season. In the Saints first match on August 22nd in Winter Haven, Fl the girls fell to #4 Polk State College 3-0. The Saints are looking to bounce back in the home opener on Wednesday, August 23rd. They will host Lake Sumpter State College.

Before taking over the Head Coaching job at Santa Fe, Cheronis was with the University of Florida for 18 seasons as the Associate Head Coach. Where he had much success with 17 SEC Championships and 18 NCAA Tournament appearances.

With only having been at Santa Fe for 3 years Coach Cheronis has already been successful. He brought his team to a Mid-Florida Conference Championship in 2014 and the NJCAA Tournament in 2016.

On Monday Head Coach Nick Cheronis talked with Steve Russell on Sports Scene. Coach Cheronis credits what was a great 2016 season to having the right matchups in the tournament and the mentality of his players in how they could bring home a win.

Coach Cheronis expressed just how this year will be difficult after losing 5 serve receivers and that the hope is that the other teams lost some talent as well.

IT'S GAMEDAY!!! #SFvolleyball takes the court for the first time this season on the road at @Polk_Athletics at 6pm. #SicEmSaints pic.twitter.com/DQihRfHSNU

The Saints will be hosting Lake Sumpter State College on Wednesday Night in its home opener at 7:00 P.M.

Follow me on Twitter @SarahCarlieUF or Instagram @sarahcarlie
@SarahCarlieUF
Previous Who’s Fighting for Those Final MLB Playoff Spots?
Next Tim Walton Weighs in on Gator Softball