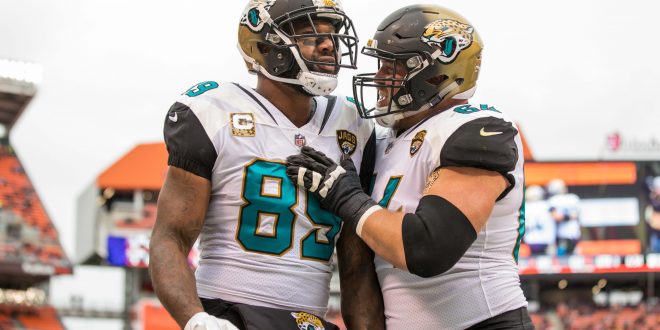 Jacksonville Jaguars 7-3 for First Time Since 2007

Here’s a sentence I bet you thought you’d never read. The Jacksonville Jaguars are one of the best teams in the National Football League. Besides the fact that they’re leading the AFC South, the Jags have a top ten offense and the top defense.

In fact, the Jaguars start 7-3 for the first time in a decade. Yesterday’s rout against the Cleveland Browns was ugly. But, Jacksonville doesn’t care about the looks of it; they just want to keep winning.

A win over the Browns (0-10) is hardly a feat. But, it was still a tricky one for Jacksonville. (Let’s not forget, the Jaguars did finish 3-13 last year. A stellar start does not equate them to the Patriots.)

The Jags led 10-0 until just before halftime. Then, the Browns scored a touchdown before the clock ran out. A scoreless third quarter meant Jacksonville had two choices- Come back swinging or lose to Cleveland.

Last year’s Jags (3-13) might have petered out. This year’s no-joke Jaguars chose the former, though.

That top-ranked defense forced five turnovers, including two in the last two minutes. (Where’s their chain?)

And a recovered fumble made its way into the endzone. 19-7, Jacksonville.

Change Can Be a Good Thing

Blake Bortles is a spotty quarterback. So now, he plays in patches. Bortles’ flashes of excellence are manipulated and fleshed all the way out. His more lackluster days fall onto the offense. Last year, if Bortles suffered, the team suffered.

Really, that’s how Jacksonville’s offensive game has gone for the past ten years. No quarterback, no win. As the league adjusted to relying on the run, Jacksonville stayed behind.

Now, it looks like they should have joined the party a lot sooner. Against the Steelers, Bortles made fourteen total passing attempts and completed eight of them. Loss, right? Nope, Jacksonville gave Pittsburgh a beatdown and won 30-9. That’s maybe the most potent example, but the storyline appears in every game. If Bortles is struggling, it’s a Bortles problem. The Jaguars can still steamroll ahead. Bortles, himself, acknowledges the presence of the team win. Listen to his postgame thoughts here.

Play changes are important, but is not the only thing responsible for the Jaguars monumental rise.

Before they went 3-13, the Jags paid up for a defensive unit. This year, those players are becoming more productive and the addition of three more defensive pieces (acquired during free agency) has paid off.

The other side is young, but ready. With their first draft pick (fourth overall), the Jags snagged Leonard Fournette out of LSU. So far, he’s a top ten rusher with 740 yards and has the fourth most touchdowns (6) scored by a running back this season.

In the fourth round, they took Oklahoma wide receiver Dede Westbrook. Westbrook had his NFL debut yesterday against the Browns, where he caught three passes for 35 yards.

Jacksonville has been building brick by brick, but now the team is starting to bring it home.

Jacksonville to the Super Bowl?

Maybe not. But, this season-long push to the playoffs is rolling out nicely. Next week, the Jags will take on the Cardinals. The Cardinals aren’t the Browns, but they lost to a DeShaun Watson-less Texans yesterday. If Jacksonville can clean up their wins, this season will be one to remember.