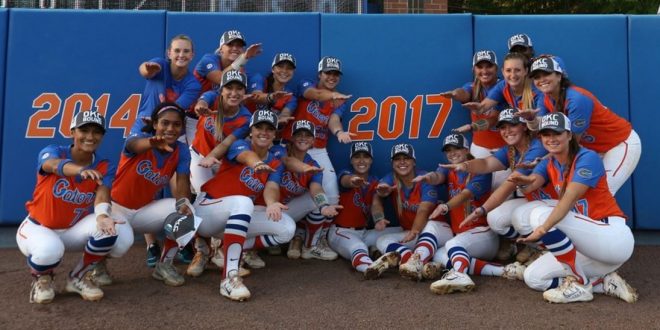 A New Season for UF Softball

Nine months. It has been nine months since UF softball fans have waited to see their team play. And with one pitch on Friday, the wait will finally be over.

Learning From The Past

The Florida softball team returns to the field February 9 with high expectations. After a disappointing season in which they came close to winning the championship, the Gators are expected to go far into the postseason once again.

In 2017, Florida made its eighth trip in the Women’s College World Series after going 50-5 in the regular season. The team appeared in the championship series for the third time in the last four seasons.

The Gators squared off in Women’s College World Series finals, the opening game of the series turned into the longest game in finals history. The game was the highest-rated game 1 in WCWS championship series history. The Sooners would take the 17-inning thriller 7-5, and clinched the championship the following day with a 5-4 victory.

The USA Today/NFCA Division I Top 25 Coaches’ Poll and ESPN.com/USA Softball Collegiate Top 25 Poll both tabbed the Gators as the No. 2 team in the nation behind only Oklahoma heading into the 2018 season. With this ranking comes a lot of eagerness and a lot of expectations from the team and the fans.

This season, the Gators will face a very tough task as the team is scheduled to face nine other programs ranked inside this year’s preseason top 25. Head coach Tim Walton believes that the leadership of his senior class will be the key to success in the 2018 season.

“They are the four best leaders that a coach could ask for,” Walton said.

Florida starts its 2018 campaign at the USF Wilson-DeMarini Tournament against Illinois State Feb.9 in Tampa, Fla. at 4:45 p.m. The team will get a good idea of what they will need to work on as the year progresses.

With juniors Kelly Barnhill and Amanda Lorenz, Walton anticipates, that pitching and defense will be the strengths of the team. Barnhill and Lorenz were named to the top 50 “Watch List” for the 2018 USA Softball Collegiate Player of the Year Award.

With Barnhill having a career ERA of 0.81 and Lorenz never made an error, it is easy to see what Walton sees in his team’s defensive abilities. Where the team may struggle is offensively.

Florida struggled to muster a lot offensively as they were 46th in the nation in batting average (.299) and were 59th in home runs per game (53).

Even with sub-par numbers last year, Walton believes the entire lineup can hit when it needs to.

“On any given day, depending on the pitching 1-8 can hit it out of the ballpark,” Walton said. “When you can go up and down the lineup like that, you never know.”