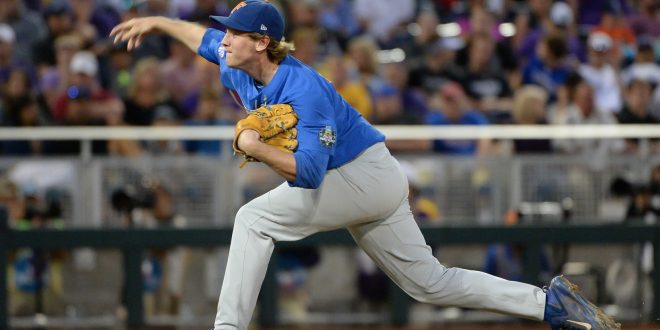 The 2017 Florida Gator Baseball team had talent. Enough talent to make history for Florida’s baseball program over 103 seasons, 14 SEC championships and 11 College World Series appearances. Last season, Florida finally won their first College World Series. The guy on the mound for most of the post-game celebrations of the 2017 season, was junior right-handed pitcher, Michael Byrne.

Byrne didn’t have just a normal 2017 season. Byrne had a top-notch season and lead the Gators to something they had never done. Now, the team gets to parade their National Championship rings that they rightfully earned.

After Byrne pitched only 16 innings in his 2016 season, Head Coach Kevin O’Sullivan planned to have Byrne as a mid-week pitcher for the Gators in their 2017 season.

In the early part of last season, the Gators took some loses as they continued to look for a closer. After O’Sullivan tried to have his freshman pitchers fill this role, Byrne proved to be the guy cut out for the job.

Byrne didn’t just come in and close games. Byrne made history. He recorded 19 saves for the Gators. This crushed the previous record of 13 saves in a season for a Florida pitcher while also leading the nation in saves.

Byrne says that he won’t take last year’s accomplishments as pressure heading into this season.

Byrne’s recorded an ERA of 1.67 in his 38 appearances last year. Including giving up zero earned runs over 3.1 innings pitched in the College World Series Finals against LSU last season.

Going into this season, Byrne is named to the Preseason Watch List for the 14th annual National Collegiate Baseball Writers Association Stopper of the Year Award. This award is given to the top relief pitcher in NCAA Division I Baseball, the association announced this week.

Byrne has a nasty three-pitch mix in his pitching arsenal with his fastball, change-up and slider.  He says he’s been working on his velocity going into this season.

The Gators will have their season opener against the Siena Saints at McKethan Stadium this weekend. Action begins Friday at 6:30 p.m.