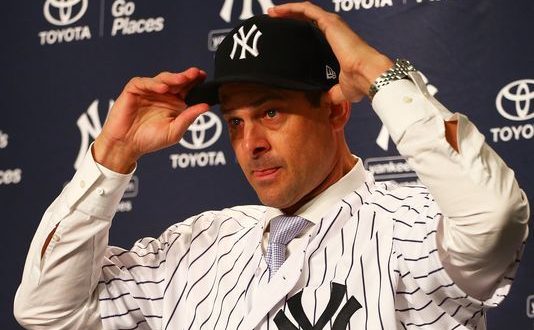 The nine-year-long chapter of Joe Girardi as manager of the New York Yankees has officially ended.  Girardi’s contract was never renewed, and instead New York signed former player Aaron Boone to fill his shoes. Boone has yet to prove his abilities as manager, but he has remained a student of the game. Since retiring, he has remained in the baseball world as a color commentator. He is making a point of connecting with the players on a more personal level, an approach seldom used by Girardi. Boone believes that the more he knows his players, the better they can prepare to perform on a nightly basis.

The Yankees are storming into spring training with an army of decorated young talent. The platoon is headlined by the reigning AL Rookie of the Year Aaron Judge as well as the reigning NL MVP Giancarlo Stanton. The two of them alone brought in a combined 111 home runs last season, enough to supply the whole American League. The same starting rotation as last year is returning to the mound, including young All-Star Luis Severino. Severino had an ERA of 2.98 in 31 games played last season.

There has been a mood shift from last season to this one. While last year’s headlines were riddled with questions and speculation, this year there is no doubt. This team proved what they can accomplish, and their appetite for success holds no bounds. “The hunger is there,” Boone said. “There’s no satisfaction with what they were able to accomplish.” This could be the team that restores power back to New York. They were one game away from the World Series last year, and that was 59 home runs lighter than they are this year. The rebuild has been accelerated so that the time to win is now. That being said, Stanton has 10 more years guaranteed on his contract and Judge is under contract until he is 30. Expect the Yankees reign to be long and prosperous so long as they can find consistently strong pitching.

Only pitchers have reported to spring training so far. Position players are slated to report on February 18th, and there will be a full team workout on February 19th.