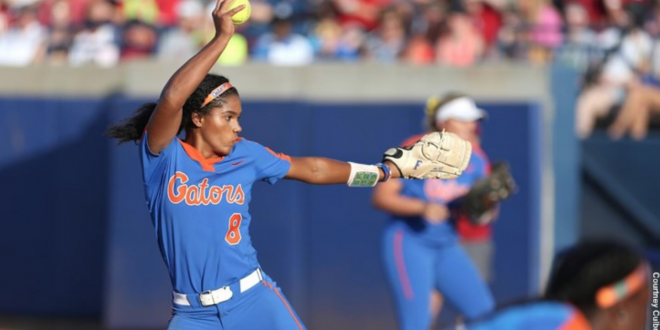 A pair of first-inning singles proved to be enough offense for UCF softball, as they beat the fourth-ranked Florida Gators 1-0 Wednesday night in Orlando.

Florida came up empty at the plate all game, mustering just one hit against Knights starter Alea White. Nicole DeWitt’s third inning double wasn’t enough to spark a rally, and the Gators stranded their remaining baserunners. White was dominant, giving up just one hit in seven complete innings of work en route to her 19th victory and seventh shutout of the season.

UCF got things going early against Florida’s Aleshia Ocasio. Freshman Aubrey Johnson singled and advanced to second on a foul-out, setting up a two-out clutch situation for Cassady Brewer. The cleanup-hitting sophomore came through, delivering a sharp single through the right side to score Johnson and get the record-breaking crowd on its feet in the first frame. Brewer alone out-hit the Gators, as she finished 3-for-3 on the evening.

B1 | UCF strikes first with an RBI single through the right side. Knights ahead 1-0 with two outs.

White ensured that the lineup had already done its job. The sophomore controlled the rhythm of the game, allowing very few opportunities for the Gators to tie it.
After a successful weekend in Gainesville in which Florida finished 4-0, the Gators offense came out sluggish. Florida was able to draw five walks, but left all six baserunners of the night stranded.

As head coach Tim Walton put it, the Gators were waiting for a rally that never came.

Florida (32-5) lost its fourth road game of the season, the first since falling to Georgia in Athens almost three weeks ago. And for an offense that outscored last weekend’s opponents Jacksonville and Hampton 31-1, a one-hitter certainly comes as a surprise.

The Gators hope to leave their offensive struggles in Orlando, as they will be right back on the road this weekend in Tuscaloosa. Saturday’s first pitch against 15th-ranked Alabama is set for 1:00 PM on ESPN2.