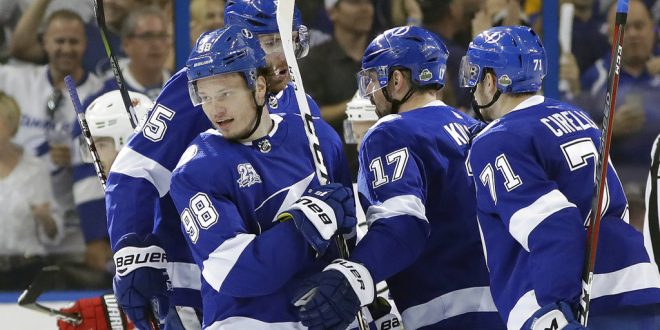 The Boston Bruins were able to engineer an impressive series victory over the Toronto Maple Leafs, but it’s the Tampa Bay Lightning that still represents the sternest test for the Bruins this season.

The top two teams in the NHL’s Eastern Conference will face off on Saturday from the Amalie Arena at 3 p.m. Tampa Bay will benefit from home-ice advantage throughout the series. Although, the Bruins were able to go 3-1-0 against Jon Cooper’s men during the regular season.

After comfortably dispatching of the New Jersey Devils in Round 1 of the playoffs, the Bolts have been preparing for their opponent since April 21.

Keys for the Bolts

The Lightning was able to smash in 18 goals in just five games against the Maple Leafs in Round 1. While the Bolts are by no means a poor defensive team, it’s their offensive flair that has propelled them to this far.

The Bolts’ top line of Steven Stamkos, the mid-season signing Nikita Kucherov and J.T. Miller was arguably the most prolific attacking trio in the league this season. Rarely has a team managed to shut down the Stamkos-Kucherov tandem.

But the Lightning also isn’t heavily reliant on one player. Centers Brayden Point and Yanni Gourde each flourished under Cooper’s system this season.

Defender Victor Hedman is in contention for the Norris Trophy, the award given to the league’s top defenseman. The Bruins have one of the best defenses in the league, so it will be important for the Bolts to keep a good defensive record throughout the series as well.

Keys for the Bruins

The Lightning may be one of the league’s most ferocious teams, yet the Bruins represent one of the most experienced squads remaining. Defenseman Zdeno Charra was brilliant throughout the B’s first-round series, and he proved that he’s still got plenty left in the tank.

The Bruins also hold a slight advantage in the goalie position. While Tuukka Rask wasn’t at his best against the Maple Leafs, the veteran shot-stopper made a series of clutch saves to help prevent elimination.

The Finnish goaltender still allowed the fourth-fewest goals throughout the regular season for the B’s. Meanwhile, the Lightning’s Andrei Vasilevskiy has been on a poor run of form going back to the latter parts of the regular season.

Vasilevskiy has also enjoyed very little success against the Bruins. The Russian is just 1-4-1 with a .922 save percentage against the B’s throughout his career.

The Lightning will surely benefit from the week of added rest. The Bruins will be playing on four days less rest. But the B’s can build off the fact they’ve played well against the Bolts this season. Additionally, they faced the tougher first-round opponent.

In the end, it may just be a story of the Bolt’s vicious attacking flair versus the Bruin’s ruthless and pragmatic style-of-play.

The winner of this series will play either the Pittsburgh Penguins or the Washington Capitals for a chance to play in the Stanley Cup Final.