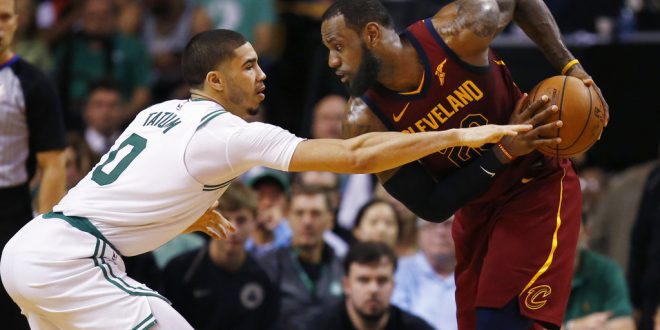 But Stevens isn’t ready to take all the credit.

“The praise is uncomfortable,” Stevens said. “It’s just something that, these guys should be getting it all. We all have a role to play and we all need to play that role as well as we can.”

His players will be looking to perform those roles in Game 2 as well as they did in Game 1. In that Mother’s Day 108-83 victory, Boston limited James to just 15 points on 5-for-16 shooting, while keeping the Cavs as a whole to just 15.6% (4-for-26) shooting from three-point range.

Bounce Back from LeBron?

The thing is, the likelihood of James being held in check for a second straight game is unlikely. When taking a look at how he’s performed in Game 2s so far this postseason, it becomes even more evident that James has feasted on opponents once he’s played them at least once.

Take a look at these numbers:

If the trend continues, LeBron figures to put up another monster Game 2. To do that though, he’ll probably look to attack the basket more frequently, as he settled for five threes in Game 1 and missed all of them. By going to the rim, James can get himself higher percentage shots, or draw double teams so he can kick the ball out to open shooters on the perimeter.

That’s the other part for Cleveland that will have to change in Game 2. While LeBron can be more aggressive and try to put up another near super-human performance, his supporting cast is going to have to hit shots for the Cavs to tie the series. His main scoring support (Kevin Love, J.R. Smith, Kyle Korver) went just 2-for-12 from beyond the arc in Game 1. It goes without saying they’ll need to do better.

Can the Celtics Do It Again?

At the same time, that goes back to what will be the key for Boston in Game 2 and the rest of the series: its versatility at the wing positions. In Marcus Smart, Jayson Tatum, Jaylen Brown and Marcus Morris (you can even throw in Semi Ojeleye), the Celtics have a group of wing players that allows them to switch almost everything defensively and have the length to guard the perimeter.

At the same time, especially Tatum and Brown, their offensive skill sets showed they can cause problems for a slower Cavs defensive unit, with the two youngsters demonstrating an ability to finish strongly at the basket and knock down jump shots at an effective rate.

The trio of Brown, Tatum, and Morris combined for 60 points and eight three-pointers in Game 1.

A repeat of that shooting performance and their defense on the Cavs could propel Boston to a 2-0 series lead, while LeBron and company will be looking to flip the script and send this series tied back to Cleveland.