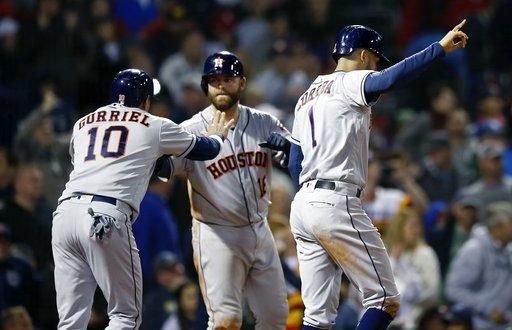 Houston Astros' Carlos Correa (1) and Yuli Gurriel (10) celebrate after scoring on a two-run double by Tyler White during the sixth inning of a baseball game against the Boston Red Sox in Boston, Sunday, Sept. 9, 2018. (AP Photo/Michael Dwyer)

With just 21 days remaining in the regular season, the MLB Playoffs are far from set in stone. In 4 out of 6 divisions, the top teams are within 5 games of each other. In some cases, the divisional race is a toss-up between 3 teams.

This is perhaps the most intriguing division in the hunt for October. The Colorado Rockies (78-64), LA Dodgers (78-65), and Arizona Diamondbacks (76-67) are all jockeying for position. The outcome could possibly be decided by the results of the remaining Rockies versus Diamondbacks games. The two teams face off 7 times in September, accounting for about a third of each teams remaining games. Arizona has been sliding from the top lately, suffering series losses to the Mariners, Giants, Dodgers, and Braves within the past several weeks.

For the Dodgers, the time to win is now. The pieces to win are certainly there, as they fell just 1 game short of a World Series victory last year. However, the window of opportunity could be closing, as their pitching ace Clayton Kershaw may opt out of his contract at the end of this year after a decade in LA.

This is another 3-horse race between the Chicago Cubs (83-59), Milwaukee Brewers (82-62), and St. Louis Cardinals (79-64). These three currently have the top 3 records in the national league, but not by a large margin. Each team plays one more series against each other. In fact, the team that may determine the outcome of this division is the 4th place Pittsburgh Pirates. The Pirates play the Brewers 6 times, the Cubs 4 times, and the Cardinals 3 times. The Brewers have especially struggled against the Pirates, at one point losing 5 consecutive games to them in July.

The biggest concern in the NL Central is perhaps the uncertainty of the closer position for both the Cubs and Cardinals. Cardinals manager Mike Shildt has been unsatisfied with current closer Bud Norris after several blown games. Shildt will be forced to use a committee of closers in the meantime until he can find someone who will produce consistent success before it’s too late. The Cubs have been without their closer Brandon Morrow for months now, as he’s been on the DL. Cubs manager Joe Maddon is skeptical if he will return at all, which means it’s time for him to start looking for other options.

Not looking good for Brandon Morrow. Time running out to get him ready, according to Maddon.

The AL West has belonged to the Houston Astros (89-54) and Oakland Athletics (87-57) this year. Dominant hitting from the likes of José Altuve and Alex Bregman for the Astros, as well as Jed Lowrie and Khris Davis for the A’s, have put each team into a safe position to each make the playoffs. Four consecutive wins for the A’s separated them from the Mariners by 7.5 games. Each team will have to face the Mariners 3 more times before the season ends.

Truth be told, the AL Wild Card race isn’t currently all that exciting. The winner of the NL Central will most likely take the second Wild Card spot along with the Yankees, who have a comfortable 10-game cushion for the first spot. A massive losing streak for either the A’s or Astros combined with a massive winning streak for either the Mariners or the Tampa Bay Rays would be necessary for the outcome to be swayed at all.

The NL Wild Card race is a much different story. The Dodgers, Diamondbacks, and Phillies all sit within 5 games of the Cardinals, who could be setting up for a collapse if they don’t get their closer situation under control. The Phillies have one of the most difficult closing schedules, as the face the Braves 7 times and the Rockies 4 times. The Phillies play these games and more 17 consecutive days to close out the season.

For MLB players, the next few weeks could be the difference between cleaning out their lockers and hoisting the hardware.

Previous NFL Roundup: A Subpar Start, an Impressive Showing and an Unsatisfying Ending
Next Chauncey Gardner-Johnson on Loss to Kentucky