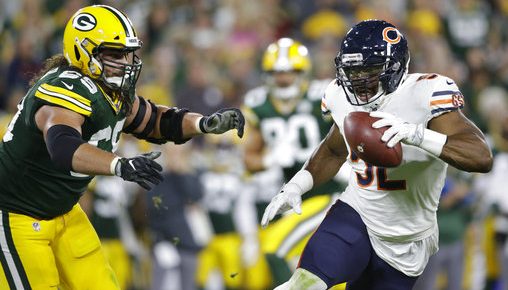 Chicago Bears' Khalil Mack intercepts a pass and returns it for a touchdown during the first half of an NFL football game against the Green Bay Packers Sunday, Sept. 9, 2018, in Green Bay, Wis. (AP Photo/Jeffrey Phelps)

NFL Roundup: A Subpar Start, an Impressive Showing and an Unsatisfying Ending

After a long, agonizing wait, the first official week of the NFL football season is finally underway.

From blowouts to blown leads to a tie (yes, a tie!), Sunday brought the usual feelings of nervousness, excitement and even dread for football fans.

In the middle of last season, the Buffalo Bills named Peterman their starting quarterback after benching starter Tyrod Taylor.

Bills’ head coach Sean McDermott benched Peterman after he threw a handful of interceptions in the first half of his first game. Taylor was back in.

It shocked Buffalo fans when Taylor was traded at the end of the season. It came as an even bigger shock when Peterman was named the starter for 2018.

His showing in the 47-3 loss to the Baltimore Ravens on Sunday didn’t give fans much hope for the rest of the season. Peterman threw for 24 yards, completing only 5 of 18 passes. He also threw two interceptions.

Rookie quarterback Josh Allen came in to replace Peterman in the third quarter after trailing 40-0. His performance was slightly better, completing 40 percent of his passes for 74 yards.

McDermott said he will evaluate the quarterback situation.

With the six-year, $141 million contract extension Chicago gave him, Mack is now the highest paid defensive player in NFL history.

No one knew if the high price the Bears paid was worth it – until Sunday night at Lambeau Field.

Mack had himself a day with a strip sack (literally took the ball out of DeShone Kizer’s hands), a pick-six, a forced fumble and fumble recovery all in the first half.

Although it was great debut for the new Bear, the outcome wasn’t satisfying: the Green Bay Packers came away with a 24-23 win after being down 20-0 for almost three quarters.

It happened in a 21-21 tie with the Pittsburgh Steelers. The tie gave the Browns the best start to a season since 2004.

“This is nothing to be excited about,” Browns wide receiver Josh Gordon told ESPN.

Quarterback Tyrod Taylor’s (yes, the same one from Buffalo) completion percentage was only 37.5 in Sunday’s game against Pittsburgh. And, although, he had a few positive things to say he knows they all have work to do before taking on the New Orleans Saints next week.

Browns’ fans probably weren’t satisfied with the tie either. They may or may not have anticipated the chains coming off the Bud Light Victory Fridge.

Cleveland. You fought hard. Unfortunately, the #BrownsVictoryFridge only opens with a W. But after that game, we doubt they'll stay locked for long.

Week 1 of the NFL season continues tonight. The New York Jets face the Detroit Lions at 7:10, and the Los Angeles Rams take on the Oakland Raiders at 10:20.

Camille Woodhouse is a Sports and Media student at the University of Florida College of Journalism and Communications. In the past, she has covered the Atlanta Falcons and Florida Gators football for various sports news outlets. She is an Atlanta native and a fan of football.
@CJW_SportsRadio
Previous U.S. Open: Osaka, Djokovic Capture Grand Slam Glory in New York
Next MLB Playoff Race Heating Up in Final Three Weeks