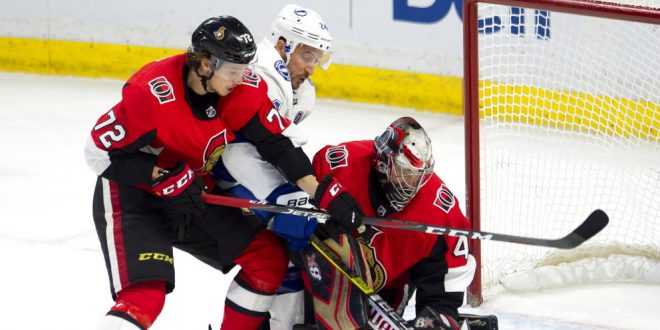 Gourde, Point the Heroes as Lightning Come From Behind, Grab OT Win in Ottawa

Yanni Gourde’s winner just 14 seconds into overtime capped a 4-3 come from behind victory in Ottawa for the Tampa Bay Lighting on Sunday against the Senators.

The Lightning twice came back from deficits, 2-0 and 3-2. Brayden Point’s goal tied the game at 19:33 of the 3rd period, before Gourde’s OT-winner gave Tampa Bay it’s conference-leading 10th win of the season.

The end of the game was a more positive note for the Lightning than the beginning of the game.

With backup keeper Louis Domingue in net (Andrei Vasilevskiy was resting), Ottawa pounced to a 2-0 lead in the first period.

Both goals came via the power play, with Bobby Ryan striking first within the first five minutes. The Senators worked the puck around beautifully before Mark Stone slipped the puck to an open Ryan for the one-timer.

When in doubt, move the puck like the @Senators right here. #TBLvsOTT pic.twitter.com/SH1N4SbDqj

Ottawa punished Tampa Bay again on the power play later in the period. The puck found its way to a Ryan Dzingel who was behind the net and slid it across the face of goal for an easy finish for Maxime Lajoie.

From that point though, the Lightning outscored the Senators, 4-1, the rest of the way.

They cut the lead in half in the second period. A good move led to a crowd of bodies and bouncing puck in front of the Ottawa net, with Cedric Paquette getting a stick on the puck and getting it past Ottawa keeper Ryan Anderson.

Mathieu Joseph then scored his first career NHL goal at the beginning of the third period to tie the game up for the Lightning.

The Senators then re-took the lead via Cody Ceci with 4:44 left in the game.

But the Lightning didn’t fold.

Brayden Point knotted things up with just 27 seconds left in regulation. The Lightning got a power play goal of their own after Ryan McDonagh fought to keep the puck in the offensive zone.

That set it up for the Lightning to take their chance in the overtime period. Gourde made sure the Lightning grabbed a big two points on the road.