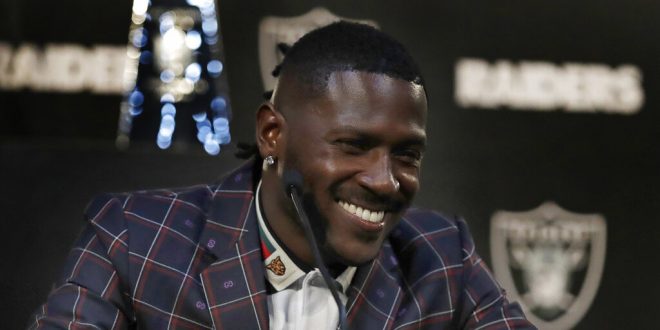 One of the NFL’s star wide receivers will have a new team in 2019. Former Pittsburgh Steelers standout Antonio Brown was introduced by the Oakland Raiders on Wednesday after the team agreed to a trade with the Steelers that sends 2019 third and fifth-round picks to Pittsburgh in exchange for the nine-year veteran.

Antonio Brown Happy To Be A Raider

"I'm here to lead, take this thing over — whatever you need from me."

We stayed behind the scenes with AB during his first hours in the Bay.

After a rocky 2018 season in Pittsburgh, Antonio Brown is ecstatic to have a fresh start with a new team on the opposite side of the country.

“I am extremely grateful to be here,” Brown said. “What a great opportunity for me and my family. I know I’m excited just how I got here and I’m looking forward to making these guys proud.”

The Raiders bolstered their receiving corps by adding Brown and former Los Angeles Charger Tyrell Williams so far this offseason.

“Well, I get excited because of where this man comes from,” Gruden said. “He’s done everything in his power to be the best he can possibly be – on and off the field. His body of work is not only impressive, it’s fun to watch.”

Brown Gets Acquainted With Carr Early

Antonio Brown wasted no time getting to know his new quarterback. Soon after his press conference, Brown made his way over to Raiders QB Derek Carr’s house to meet with him.

On Tuesday, TMZ reported that Carr and Brown were already working out together at a park outside of the team’s facility.

“I think he’s hungry for success,” Brown said of Carr. “I think we stand for the same causes: God fearing men, family-first type of people, and we just want to be the best at our craft of putting in work, in the meetings, on the field.”

No Bad Blood Between Brown and the Steelers

Although the breakup between the Pittsburgh Steelers and Antonio Brown was anything but nice, the two sides have remained cordial after the trade.

“To any kid out there from Pittsburgh, Pittsburgh will always be my family,” Brown said. “Those guys gave me a chance when I was a 21 year old kid. I know Steeler Nation is having a bad day today, but it’s nothing but love.”

Brown began his Steelers career in 2010 as a rookie out of Central Michigan. During nine seasons in the Steel City, Brown caught 837 passes, racking up 11,207 yards and catching 74 touchdowns.