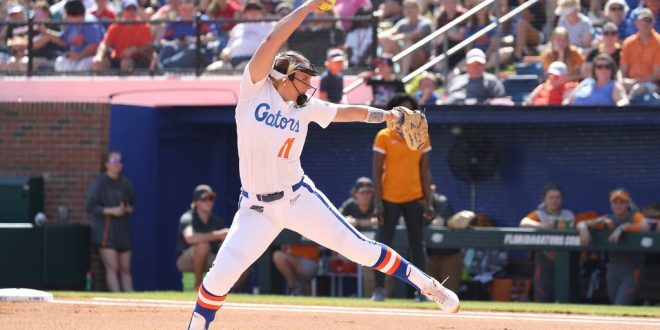 Gators drop series on a walkoff

Amanda Sanchez hit a walk-off double for the LSU Tigers as they win the game 3-2 and take the series victory over the Florida Gators.

The Gators got on the board first with a two-run home run in the top of the first inning by Kendyl Lindaman.

However, Florida would struggle to find an offensive rhythm following their two-run score. They recorded just three hits after the first inning.

Shelbi Sunseri got the Tigers on the board with an RBI single in the third inning. LSU would tie the game later in the sixth inning on a fielding error.

Trying to work the game into extra innings, Kelly Barnhill fell behind in the count 3-0 to Sanchez. Barnhill let one slip, Sanchez had the green light and the series was over.

Kelly Barnhill was effective yet again for the Gators allowing three runs, two earned, to go along with six strikeouts in her six and one-third innings. Even with a solid performance, she would pick up her third loss on the season giving her an overall record of 15-3.

On the other side, Shelby Wickersham was lights out for LSU once she got out of the first inning. She struck out four while walking four in the complete game for the Tigers.

Even though an error would result in the Gators giving up a run, they did make some spectacular plays like third basemen Hannah Sipos.

Hey @SportsCenter, think we have a #SCTop10 play for you right here ‼ #Gators lead 2-1 headed to the 6th inning here in Baton Rouge. pic.twitter.com/KHN7TahOTD

The Gators will have to wait over a week for the opportunity to improve their conference record when they travel to Ole Miss. In the meantime, Florida returns home for a four-game homestand which starts Wednesday at 7 p.m. with the Minnesota Gophers.