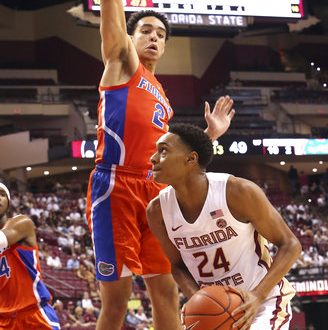 March Madness is finally upon us. Whether you’re filling out one bracket or 100, it’s important to know who you’re picking. There are teams in the tournament you probably never have heard of, like Farleigh Dickerson and Gardner-Webb. And of course, your blue-blood programs being Duke, UNC, Kansas and Kentucky.

One of the hotter teams entering the tourney is Florida State. The Seminoles are coming off an ACC title game run, falling to number one Duke in the championship game. The Noles earned a four seed in the West Region and were matched up with the American Conference champions Vermont.

Let’s take a look at the matchup.

Florida State has competed with the best of the ACC all season long. The Noles finished conference play 13-5, 27-7 overall, with wins over Louisville and Virginia Tech (twice), along with an ACC tournament win over Virginia. They also have out of conference wins over LSU and Purdue early in the season.

The Seminoles are paced offensively by Mfiondu Kabengele. The sophomore point guard from Ontario, Canada leads FSU in scoring, averaging 12.9 points per game. Terrance Mann is also a force on the offense end, scoring 11.2 ppg and averaging 6.4 assists per game.

However, it’s the defense that makes the Noles a dangerous team. FSU allows only 67 points a contest while also averaging seven steals a game.

That defense will be needed to stop Vermont leading scorer Anthony Lamb. Lamb leads the Catamounts with 21.4 points per game and 7.8 rebounds a game. He’s the key for Vermont’s success, who finished the season with a 27-6 record.

The Catamounts are top-heavy in scoring. Vermont has two other players averaging double-digit point totals, Ernie Duncan at 13.8 ppg and Stef Smith at 12.3 ppg. No one else on the roster averages more than 6.5 points a game.

Who's ready for UVM and Florida State today???

Here's all your Catamount coverage from this week:

Despite the lack of offensive depth, Vermont, like FSU, is formidable on defense. The American conference champs allow only 62.6 points per game, good for 13th in the nation. This may cause problems for the Noles.

Expect Vermont to hang with Florida State for a good chunk of the game, but the Noles depth and ability will hold off an upset bid from the Catamounts and put them into the round of 32.

With fans in attendance for the first time this season, the Tar Heels delivered. Head …