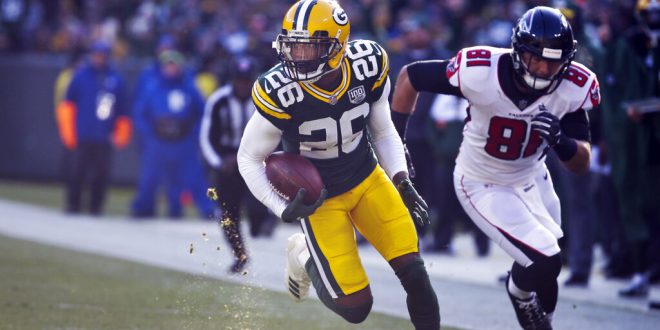 In this Dec. 9, 2018, file photo, Green Bay Packers' Bashaud Breeland returns an interception for a touchdown during the first half of an NFL football game against the Atlanta Falcons in Green Bay, Wis. The Kansas City Chiefs have signed Breeland to a $2 million contract on Tuesday, March 19, 2019, for the upcoming season that could be worth an additional $3 million if incentives are met. (AP Photo/Mike Roemer, File)

The National Football League will open it’s 100th season on Sept. 5 with the Green Bay Packers at the Chicago Bears. This Packers-Bears match up is the oldest rivalry in NFL history, starting in 1921.

These two teams have met a total of 198 times, with Green Bay holding the overall record of 97-95-6 over the Bears.

First, it was called the American Professional Football Association.

“The teams were from four states—Akron, Canton, Cleveland, and Dayton from Ohio; the Hammond Pros and Muncie Flyers from Indiana; the Rochester Jeffersons from New York; and the Rock Island Independents, Decatur Staleys, and Racine Cardinals from Illinois. The name of the league was changed to the American Professional Football Association.” via NFL.com History

By 1922, the APFA was renamed to the National Football League. By then, the NFL was made up of 18 teams. Within those 18 teams were the Green Bay Packers and the Chicago Staleys, who renamed themselves the Chicago Bears.

#OTD in 1922, the #Chicago Staleys after moving from Decatur and winning the 1921 @NFL Championship become the @ChicagoBears . The name based on George Halas' idea that football #Bears should be bigger than baseball @Cubs . Halas pictured 5th from the right. #BearDown @dabears pic.twitter.com/uUGaLpTrq1

“Green Bay earned the right to represent the NFL in the first AFL-NFL World Championship Game by defeating Dallas 34-27, January 1.” via NFL.com History

This 1966 AFL-NFL World Championship game is recognized as Super Bowl I. The Packers took home the title. In addition, Green Bay went onto claim Super Bowl II, but didn’t clinch another until 1996 (XXXI) and again in 2010 (XLV). The Bears took home their first Super Bowl win in 1985

Today, 32 teams compete in the NFL. It would not be until 2002 that the NFL would add the Houston Texans, to complete the 32 teams that the league has.

The NFL will begin officially celebrating the 100th season with the 2019 NFL Draft . After opening the 2019 season with Packers v. Bears, the celebrations will continue all year long until Super Bowl LIV.

How could we forget this award-winning Super Bowl ad?

The 2019 season kicks off on a Thursday and airs on NBC. Following the first game of the 100th season, the the Patriots and reigning Super Bowl Champions will play on Sunday to start Sunday Night Football on NBC.