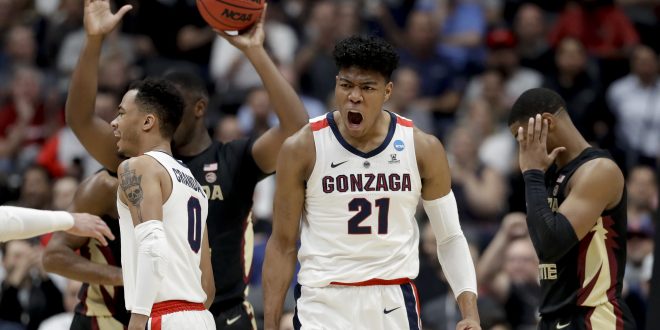 Unless you have been living under a rock, the NCAA Men’s Basketball Tournament, or March Madness, is in full effect. As the tournament has progressed, victories have been sweet and the defeats bitter.

Now, 16 teams from the Sweet 16 round will be whittled down to half. The remaining eight teams will be known to all as the “Elite Eight”.

Viewers can reflect on the previous round of the tournament for a sneak peek at what is to come before their brackets are ultimately busted. So far, eight teams have played stunning games with eight more to go throughout the day.

Gonzaga has been at the top tier of college basketball for their elite skills. They boast an incredible and overwhelming offense that’s ranked No.1 overall according to KenPm.com. The Bulldogs won Thursday’s matchup against FSU in a different way, however. They had to face off with the

Seminole’s physical nature by out-defencing a predominantly defensive team. Gonzaga came out on top 72-58 over FSU last night thanks to some sharp shooting by potential NBA pick Rui Hachimura. He scored 17 points and grabbed four rebounds. Next up, Gonzaga takes on Texas Tech in the Elite Eight on Saturday afternoon.

March Madness is notorious for some of the greatest matchups in college basketball. Texas Tech is a team that is no exception. The Raiders hold the title for arguably the best defense in the association. They allowed just a mere 44 points to high-scoring Michigan.

This upcoming game against Gonzaga’s stunning offense could be the one that sends the Raiders to their first Final Four.

The Purdue Boilermakers advanced to the Elite Eight after an electrifying 99-94 overtime victory against the Tennessee Volunteers. Ryan Cline was the game favorite last night, going shot for shot despite an 18-point Volunteers comeback run. He sank 27 points overall and seven three-pointers.

The Boilermakers will have to play against Virginia on Saturday next.

The No. 12 Ducks mounted a late-game comeback against the Cavaliers after trailing by 8. Virginia’s pair of shooters Kyle Guy and De’Andre Hunter went 8-for-28 last night. Oregon started to make a run against the clock, but Virginia buckled down on defense and didn’t allow a single shot for the last five minutes.

Virginia Coach Tony Bennett said that the whole match was a “slugfest”, with each team trying to outlast the other.

Teams Yet to Play

Both of these teams have been challenged in the Tournament so far. The Spartans were given a run for their money against No. 15 Bradley in the first round, while LSU had to hold their ground against No. 6 Maryland.

The Michigan lineup is strong, with Cassius Winston averaging 18.9 points per game and Kenny Goins, who has 8.9 rebounds per game. While the Tigers recover from the loss of coach Will Wade, interim coach Tony Benford led LSU to a tight 69-67 victory over Maryland. They boast a team that puts up over 80 points on average and players that see the court for a regular time.

LSU and Michigan will take to the court today at 7:09 p.m.

Duke barely survived against the underdog UCF to advance to the Sweet 16 of the March Madness tournament.

Zion Williamson led the way in scoring with 32 points. Four-star freshmen starters from Duke scored 72 of the team’s 72 points in the 77-76 win against the Knights. Virginia Tech actually won its only matchup against Duke this season, coming out on top 77-72.

However, the Blue Devils were missing Zion Williamson, no doubt affecting the game’s outcome. Although Duke has some explosive shooters, they have trouble at the free throw line, hitting only 62 percent of shots. Virginia has only turned over the ball nine times while forcing their opponents to turn over the ball 15 times on average.

Luke Maye for North Carolina is one of three players in the tournament that is averaging a double-double. He averages 18 points a game and 11.5 rebounds, contributing greatly to UNC’s 35 offensive rebounds.

The Tigers have made their way through the tournament by shooting. Auburn has taken the most 3-point shots out of any team and is tied for three’s made. Auburn hasn’t been to the Elite Eight since 1989. UNC and Auburn will be playing tonight at 7:30.

The Midwest Regional Semifinal is bound to be explosive.

The Wildcats have one of the best defenses in the March Madness tournament at the moment and is first in scoring defense. PJ Washington leads the team’s scorers during the regular season.

For Houston, Corey Davis Jr. is their secret weapon. The senior averaged 23.5 points in the opening weekend when the Cougars won both games by 15. Both of these teams possess stellar defenses, with Kentucky holding their opponents to 50 points and Houston to 57.