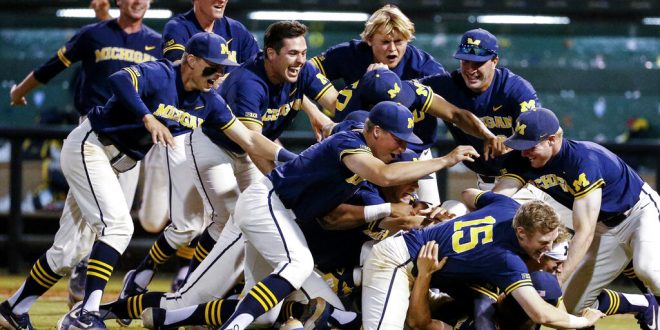 It’s official, six teams have punched their tickets to Omaha. There are only two spots left to clinch for college baseball’s biggest event of the year, the 2019 NCAA College World Series begins June 15th.

The Michigan Wolverines upset No.1 UCLA 4-2 to advance to Omaha.

Michigan hasn’t advanced to a College World Series since 1984. Ako Thomas drove in two runs with a single hit to help take down the top program in the country. Tommy Henry pitched seven solid innings that propelled Michigan to a win.

Michigan takes down No. 1 UCLA by a 4-2 score & advances to the College World Series for the 8th time in program history. #GoBlue | #RoadToOmaha pic.twitter.com/ySANpuTV62

This will be the 8th time in program history the Wolverines have advanced to the College World Series.

Louisville defeated East Carolina 12-0 on Saturday and clinched the program’s fifth trip to the College World Series.  The Cardinals came alive on a Logan Wyatt double to propel them forward and Tyler Fitzgerald took them home.

The Florida State Seminoles topped the LSU Tigers 6-4 in a sweep to advance. Antonio Velez pitched 4.2 scoreless innings and 7 strikeouts for the Seminoles.

Drew Mendoza hit a single in the bottom of the 12th inning and brought in Mike Salvatore with the winning run.

Antonio Velez was on a mission last night.

Mississippi State defeated Standford 8-1 in Game 2 of the Super Regionals. Peyton Plumlee pitched 6 strong innings and Dustin Skelton had a three-run triple as the Bulldogs wrapped up a dominant weekend.

North Carolina evened the series up 1-1, forcing a Game 3 with Auburn. The Tarheels shutout the Tigers 2-0 in Game 2 to keep their path to Omaha alive. Game 3 is currently underway

Vanderbilt beat Duke 13-2 on Sunday to advance to the College World Series. Vandy pitcher Kumar Rocker throws a legendary no-hitter to help clinch the victory. This is the first time ever in Super Regional history that someone has thrown a no-hitter.

On Sunday, Mississippi defeated Arkansas 13-5 to keep the series alive. The tie-breaking Game 3 will take place today at 3 pm.