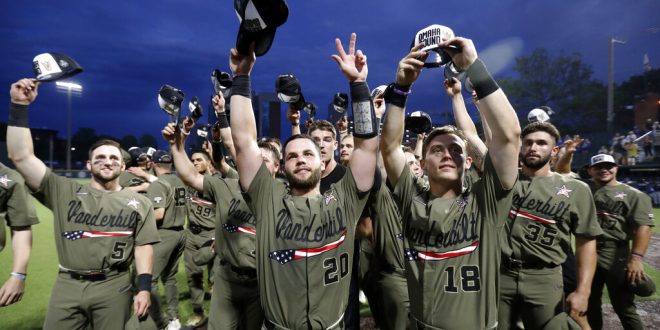 Vanderbilt ahead of NCAA World Series Match vs. Louisville

The No. 2 national seed, Vanderbilt, will open up the NCAA World Series against No. 7 seeded, Louisville, on Sunday.

The Vanderbilt Commodores ended their regular season with a 45-10 overall record and 23-7 record in the SEC. But even so, Vanderbilt continued its great form through post-season winning nine and only losing to Duke in its first game of Super Regionals.

In detail, Vanderbilt won the SEC Tournament, the NCAA Nashville Regional and Super Regional. The victims, Auburn, Mississippi State, LSU, Ole Miss, Ohio State, Indiana State and Duke were all left in the dust in the process.

Let’s take a look at the Commodores statistics compared to the rest of the World Series sides (Texas Tech, Michigan, Arkansas, Florida State, Mississippi State and Auburn) at this point of the competition.

Things to Know About Louisville

Louisville’s closer, Michael McAvene is back after being ejected from the NCAA Regional against Indiana. Going into detail, McAvene was suspended for four games for saying “that’s horrible,” after the umpire called a ball. Nevertheless, McAvene is ready to pitch and his presence in the mound will have a positive impact on the game.

In addition, the Cardinals’ bottom of the lineup is on fire.

Like the other teams in the World Series, Louisville relies on a strong top of the lineup. But the bottom lineup turned into a force of its own against East Carolina. Expect Danny Oriente, Justin Lavey, Drew Campbell, Henry Davis, Zeke Pinkham and Zach Britton to bring some of that momentum with them.

First pitch will be thrown Sunday, June 16 at 2 p.m. ET at the TD Ameritrade Park in Omaha, Nebraska.

Figuring out a plan to make it big in the soccer scene in the U.S. or anywhere else in the world. For now, I'm having a blast writing for ESPN Gainesville and learning a lot from managers and students around the workplace. I'm covering the TV beat for Gators Soccer. What a team! Follow me on twitter: @J_AguerrevereUF
@@J_AguerrevereUF
Previous Update On Kevin Durant
Next Auburn Tigers Head To Omaha For Shot At World Series Title