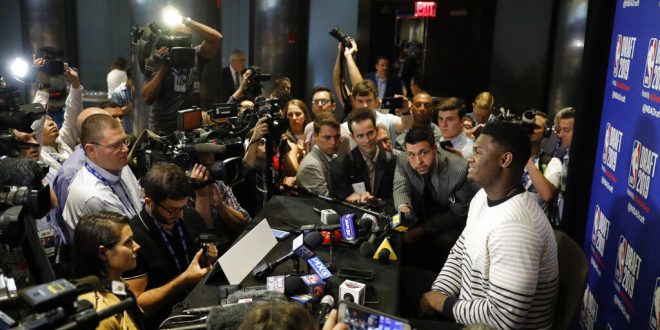 It’s the day all basketball fans have been waiting for. The 2019 NBA draft is finally upon us.

Tonight at the Barclays Center in Brooklyn, New York at 7 pm E.T. on ESPN. You can stream it live here.

Zion Williamson to the Pelicans for the No. 1 pick seems to be about locked in place right now.

So does Ja Morant to the Memphis Grizzlies at No. 2 and Zion’s teammate, RJ Barrett, to the New York Knicks at No. 3.

Last weekend’s Anthony Davis trade agreement between the New Orleans Pelicans and the Los Angeles Lakers gave the Pelicans the No.4 pick. This is when things will really start to get interesting.

Vanderbilt point guard Darius Garland looks to be a prime target for No. 4, with many teams looking to take that spot from the Pelicans.

The Atlanta Hawks are one of the teams with the most assets in this year’s draft. They’re interested in swapping two of their picks – Nos. 8 and 10 overall – for the fourth selection, per an ESPN report. The report shows that the Knicks also shot down the same offer for the 3rd selection. The Timberwolves, Celtics and Bulls have also expressed interest in the Pelicans’ No.4 pick.

In addition to the Hawks and Pelicans, the Celtics and the 76ers also lead with the most assets of this year’s draft.