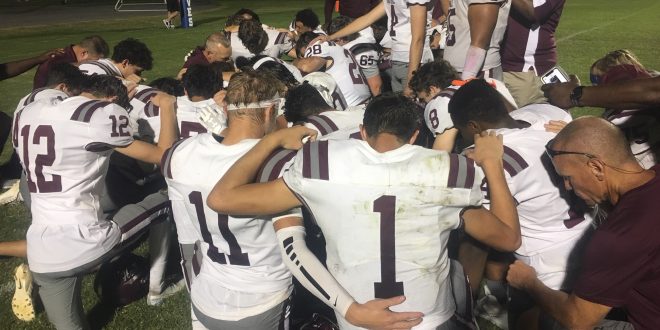 Oak Hall prays as a team following its 54-7 victory over Saint Francis.

It was a house call for Oak Hall senior Zhai Smith that set the tone for the Eagles’ 54-7 throttling of their district rival, the Saint Francis Catholic Academy Wolves. With four minutes left to play in the first quarter, Smith took an interception all the way for a touchdown to put Oak Hall up two scores.

The Eagles’ offense would go on to score 40 points in the first half. All three aspects of offense, defense and special teams functioned like a well-oiled machine.

“My biggest fear was we’ve got some momentum and the biggest thing was just to stay focused,” said Oak Hall head coach RJ Fuhr.

After Oak Hall jumped out to a quick 12-0 lead, Saint Francis responded with a touchdown drive of their own.

“We had a really nice kick return and we converted that with several good runs,” said Saint Francis head coach Scott McDaniel.

“We let them score, but then Coach Rawls made a really good adjustment on our defensive front,” Fuhr said.

After the change, Saint Francis failed to muster a single point.

“We couldn’t put enough good plays together back-to-back,” McDaniel said. “We had some opportunities to get some momentum and couldn’t really seize that and hold onto it for a long time.”

In addition to the Smith interception return for a touchdown, the Oak Hall defense added a fumble recovery and another pick-six, this time by sophomore Ryan Nolan.

“The turnovers in the second period really bit us in the butt,” McDaniel said.

Nolan added a second interception in the second half, which was the fourth turnover by Saint Francis. Oak Hall managed to score 27 points off of turnovers.

“He’s kind of our quarterback in the secondary at safety,” Fuhr said. “He’s an all-around football player. He’s got a great football IQ.”

Gonzales accounted for one passing touchdown and two rushing scores of his own. Gonzales constantly fought for first downs, lowering his shoulder despite a slight shoulder injury he suffered in last week’s game.

“I’ll do anything for this team,” Gonzales said. “We all work hard as a team. I know they always got my back and I always got their backs.”

Late in the game, freshman running back James Parker broke off a long run and then scored his first touchdown of the season a few plays later. The Oak Hall players and coaches celebrated excitedly.

“He’s a freshman that’s never played football,” Fuhr said. “The most excitement in the whole game with our team was James scoring a touchdown.”

Saint Francis looks to bounce back, Fuhr has his sights set high for Oak Hall

“We take a mental and physical break,” McDaniel said. “A little bit of a tough stretch for us the last three weeks.”

Oak Hall (4-2) hosts Bell (2-4) next week on Oct. 4. This game is important to the Eagles, who currently sit at third in the 2A Region 2 Football Standings.