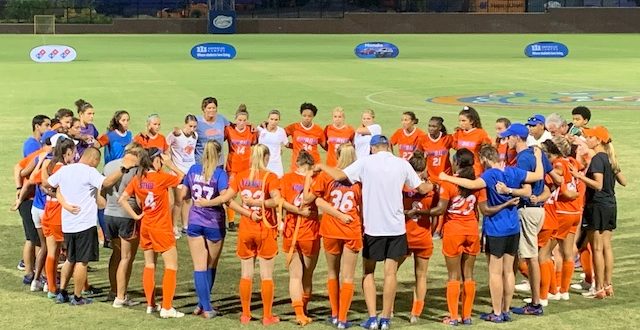 Florida Soccer Remains Strong in the SEC After Defeating Auburn

Florida (10-5) put down the Auburn Tigers (6-7-2) in a mist-covered Donald R. Dizney Stadium on Friday night by a score of 2-1. The Gators started off slow but turned things around and completely dominated the second half to bring the team record to 6-1 in SEC play.

Coming off two tough one-goal losses, the Tigers came out roaring in the introductory 15 minutes. Senior forward Jessie Gerow and midfielder Angeline Daly combined for a failed scoring chance in the 5th minute. Ten minutes later, Daly launched a long shot that sailed over goalkeeper Susi Espinoza to give the Tigers a 1-0 lead.

That was the last time Espinoza was beaten. She made four saves in the game, including a crucial diving stop in the 20th minute, diverting Auburn midfielder Bri Folds’ header away from the net.

Florida head coach Becky Burleigh knew her team was getting outplayed initially, and said this about how her team turned it around:

Florida played themselves into the game as the first half went on, and the team had a breakthrough in the 36th minute. Left-back Carina Baltrip-Reyes skipped past her defender on the left flank before whipping in a low cross that ran all the way through the box until freshman Kouri Peace met it around the six-yard area and drilled it into the net to level the score.

Peace has now scored in two straight games and has three goals on the season. Sammie Betters is the fullback that usually ventures forward, but this time it was Baltrip-Reyes. She was awarded her first assist of the season for her efforts.

The whistle blew to signal the end of a mostly even first half a short time later. Florida had seven shots at the break compared to Auburn’s six.

The Gators wasted no time taking the lead once play resumed. In the 48th minute, Cassidy Lindley played a pretty through ball to Parker Roberts, who made a lengthy run, to put her clear on net. Roberts slid the ball past the oncoming Auburn keeper to put the Gators up 2-1.

After the game, Roberts said the Gators focused on some specific attacking  buildup in preparation for this game:

Auburn struggled for any chances in the second half. They only managed one shot.

The Gators dominated possession, largely in the the Tigers’ half, but could not register another goal.

Espinoza had another important save in the 74th minute, when she acrobatically denied Daly from close range. After that, the Gators comfortably saw out the victory. Florida finished the match with a 15 to 7 shot advantage.

Florida has three games left before the start of the SEC tournament. The team sits second in the SEC East table, trailing only No. 7 University of South Carolina, who the Gators play in nine days.

Before that, though, Florida’s next opponent is Tennessee (8-5-2), who recently tied South Carolina in double overtime. The Gators travel to Knoxville on Oct. 24.

I'm a senior journalism student at Florida. I love sports, and I love covering sports. I'm one of the beat writers for the Gator soccer team right now, and if you follow me on Twitter @johnmiceli13 you'll never miss a soccer update
Previous Winless Dolphins Travel to Buffalo with New Starting QB
Next Hawthorne Head Coach Cornelius Ingram Earns First Coaching Victory at Union County 27-12