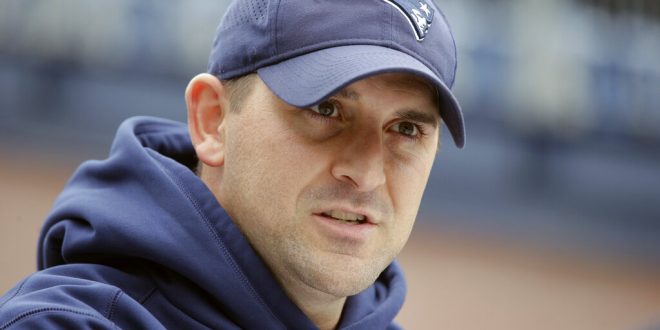 FILE - In this Nov. 1, 2018, file photo, New England Patriots special teams coach Joe Judge speaks with reporters before an NFL football practice in Foxborough, Mass. The New York Giants and Patriots assistant Joe Judge are working on a deal for him to become the team's head coach, a person familiar with the negotiations told The Associated Press The person spoke to the on condition of anonymity Tuesday, Jan. 7, 2020, because the deal is not done. (AP Photo/Steven Senne, File)

The Judge is in session.

In a move that seemingly came out of nowhere, the New York Giants have its next head coach. According to ESPN’s Adam Schefter, the Giants have reached an agreement with New England Patriots special teams coordinator/wide receivers coach Joe Judge to be the team’s head coach.

New York Giants are finalizing a deal to make Patriots’ wide receivers coach Joe Judge their next head coach, league sources tell ESPN. Deal was in the works as of last night, which is another reason Matt Rhule took the Panthers’ HC job.

Judge spent the last eight seasons on the Patriots staff. Primarily, Judge has served as a special teams coach. It wasn’t until last season when Judge started working as a wide receivers coach while maintaining his responsibilities on special teams. He is no stranger to success. During his time with the Patriots, he was a part of three Super Bowl championship teams. Before arriving on head coach Bill Belichick’s staff in New England, Judge was in Alabama as a special team’s assistant under Crimson Tide head coach Nick Saban, a former Belichick assistant. With the Crimson Tide, Judge was a special teams assistant on two national championship teams.

He comes to the Big Apple with zero head coaching experience at any level. However, working under both Belichick and Saban had to bolster his resume when applying. Judge becomes the third former Belichick assistant to become a head coach in the NFL. He joins the list of Detroit’s Matt Patricia and Miami’s Brian Flores.

Judge takes the reigns of a team going through a transition period. This season, the Giants completed the passing of the torch from longtime quarterback and two-time Super Bowl champion Eli Manning to rookie signal caller Daniel Jones. New York’s offense is led by explosive running back Saquon Barkley. New York finished the season with a 4-12 record. They have the fourth selection in this year’s Draft, marking the third year in a row they are selecting in the top six.

Judge has talent to build around in New York, but it’s a matter of time if the winning ways of his mentors can translate with the Giants.

Previous Big upset across Saints nation
Next Its finally a good time to be a Bills fan!