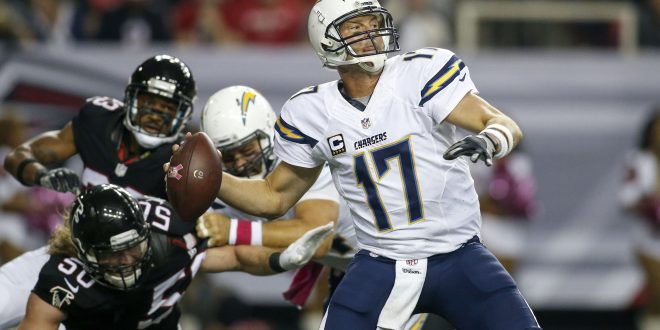 Rivers Should Fit in with Colts

After 14 years as the Chargers’ starting quarterback, Philip Rivers is moving on. The 38-year old signal-caller will take his talents to Indianapolis, on a one-year deal worth $25 million.

Rivers didn’t have his best season last year but should prove a worthwhile one- (or more) year addition. Indianapolis fields a talented young roster around their new quarterback. The team last won a playoff game in 2018 – Andrew Luck’s last year with the franchise.

As a Charger, Rivers often suffered from poor protection, something largely to blame for many of his costly interceptions over the years.

This was evident in 2019, as Rivers threw 20 interceptions behind a line that Pro Football Focus ranked 29th. LA’s tackle duo – Sam Tevi and Trent Scott – allowed the second-most combined pressures in the league.

Offensive line play is one thing Rivers will not have to worry about as a Colt. ESPN’s Louis Riddick weighed in on this shortly after the signing, proclaiming that Indianapolis has the best O-line in football:

The numbers should comfort Rivers, as Pro Football Focus ranked them the third-best offensive line of 2019. Rivers’ blind-side will be protected by 31-year old stalwart Anthony Castonzo, who just re-signed on a two-year deal and finished as Pro Football Focus’ 2nd-ranked left tackle last season.

The Colts finished 7th in the NFL in rushing last season, as Marlon Mack topped 1000 yards in his third season. Indianapolis features perhaps the league’s best run-blocker in first-team All-Pro guard Quenton Nelson. They relied on the ground game to close out some close games, including an October win over the eventual Super Bowl-winning Chiefs.

Indy was often too reliant on the ground game, though, in a 7-9 campaign, and the addition of a downfield passing threat like Rivers will help. Jacoby Brissett was a decent game-manager but averaged just 6.6 yards per attempt last season, compared to 7.8 for Rivers.

Rivers will have one of the league’s more consistent downfield threats in T.Y. Hilton, despite an injury-riddled 2019 season. Hilton averaged 16.7 yards per reception in 2018 and finished with 1270 yards.

Tight end Jack Doyle gives Rivers another reliable pass-catching option, as he caught 43 passes last season, and had a career-high of 80 in 2017.

Though the signing of Rivers is seemingly a good match for both parties, there are some question marks on both ends. One of which is a shortage of proven pass-game weapons, as Zach Pascal led the Colts in receiving with 607 yards in 2019. ESPN’s Louis Riddick expressed this concern:

The team has hope that Pascal can develop into a star and T.Y Hilton can bounce back from injury, but it is still a concern. Many predicted that GM Chris Ballard would use the 13th overall pick to select a star wide receiver such as Jerry Jeudy, but the pick was traded for defensive tackle DeForest Buckner.

Another concern for Colts fans is the decline in Rivers’ play from 2018 to 2019.

Rivers finished the 2019 season with a QBR of 48.6, which was actually a few points lower than Brissett’s. This was a sharp decline in efficiency for Rivers, as his 2018 QBR of 67.8 ranked 7th in the league.

On the relatively poor 2019 season for Rivers, Louis Riddick cited a decline in arm strength and poor decision-making:

Colts fans should hope that improved pass protection can mask some of these deficiencies in the aging quarterback’s game.

Though Rivers is past his prime, there is a lot of reason for optimism about this signing for Indianapolis. He should certainly benefit from playing behind a top offensive line and they’ll benefit from his gunslinging mentality when given time to throw.

Rivers still showed many flashes in 2019 of what made him a top quarterback for so long, and his addition will allow an uber-talented Colts team to make a playoff push in the winnable AFC South.