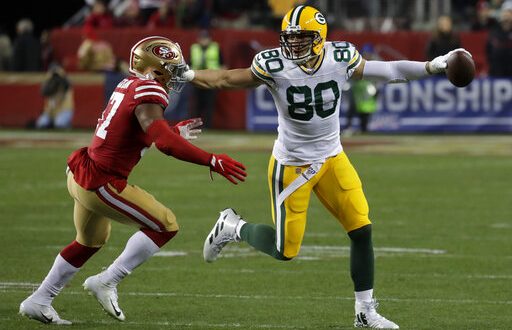 Veteran TE Jimmy Graham is eager to prove that he is worthy of being on an NFL roster. Last week Chicago agreed to sign the 33-year-old TE to a two-year, $16 million contract after Green Bay cut him.

Getting cut by the Packers was the first time Graham had lost a job. He said being let go was not only eye-opening but motivating.

There is a lot of skepticism surrounding the TE and the Bears’ decision to sign him.

This is no surprise considering Graham’s struggle with the Packers during the past two seasons. He accounted for just five touchdowns, 93 receptions and 1,083 yards combined.

Some are questioning whether Graham is burned out or if he even still has the ability to play in the league, but he is not.

Graham, almost immediately, became one of the league’s best tight ends. In his second season with the Saints, he had 99 receptions for 1,310 yards and 11 touchdowns.

This made Saints’ history. He became the first tight end to have more than 1,000 receiving yards in a season for New Orleans.

The Saints traded Graham to the Seattle Seahawks in 2015. There, he set the Seahawks’ franchise record for most receptions, receiving yards, and receiving touchdowns at the tight end position.

The Packers signed Graham in 2018 and released him nearly two years later.

Despite his lack of productivity in Green Bay, Graham is no stranger to success. He knows what it takes on and off the field. He knows that it’s not only a physical grind but a mental grind as well.

“I’m more hungry than ever,” he said.

Maddie Schmidt's goal is to become a college football reporter. Be sure to check out her sports blog, mygamedaygal.com.
@@maddieschmidt15
Previous Magic Johnson Reacts to Virus
Next Pete Alonso Making the Most Out of Extra Time

The rule of three: that phrase that signifies that everything is perfect. The New Orleans …