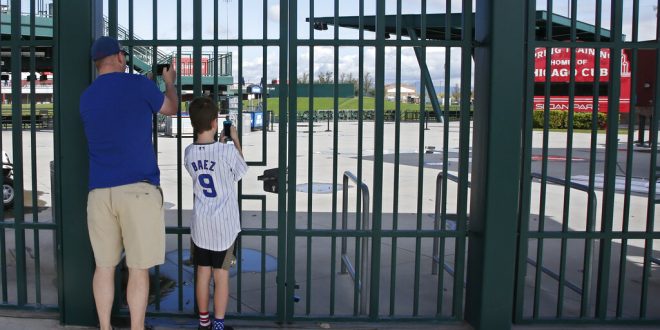 Cubs fans take photos through the locked gates at Sloan Park, the spring training site of the Chicago Cubs, in Mesa, Ariz., Friday, March 13, 2020. Major League Baseball has suspended the rest of its spring training game schedule because of the coronavirus outbreak. The league is also delaying the start of its regular season by at least two weeks (AP Photo/Sue Ogrocki)

An unprecedented time of no sports could be nearing its end soon, as Major League Baseball released a plan that could see baseball back by May.

NEWS: Major League Baseball and the MLBPA are focusing on a plan backed by federal health officials that could have players in training camps by May and games soon thereafter.

Details at ESPN on how MLB may return — and the difficulty in doing so: https://t.co/zDoNa3k4pm

ESPN insider, Jeff Passan, laid out a tentative plan that has the backing from leadership in the league office and inside the MLBPA. Most importantly, sources told ESPN that the plan has the backing of high-ranking public health officials that believe games could be played while keeping players safe from COVID-19.

According to ESPN, the plan is to have all 30 teams move their operations down to Arizona, more specifically the Phoenix area.

The league would play games using the Arizona Diamondbacks stadium, Chase Field, and 10 spring training facilities in the area.

Games would be played with no fans, and everyone connected with the teams would be isolated in hotels in the area.

For a blueprint of sorts, the MLB could look to the Korean Baseball Organization in South Korea, who has started to play intrasquad games and stream them on Youtube.

Dan Straily is a 31-year-old pitcher with eight years of MLB experience who signed a deal with the Lotte Giants in the KBO this year. Straitly said the KBO is monitoring people around the organization extremely closely.

“If anybody, anybody — if the No. 1 starting pitcher to the person cleaning, security, R&D — anybody gets sick in that time, we postpone two weeks,” Straily told ESPN. “We’ve got to make sure that no one else got sick.”

The Arizona plan is ambitious. A lot of independent factors will have to be remedied if the plan is going to make it off the ground and get baseball back by May.

A long time away from Families

Perhaps the most glaring conflict that players will have to make is to isolate from their families for four and a half months. The plan requires players to stay contained, and no fans at games means that the players and managers will have to rely on texts and Facetime to see their loved ones.

It is important to note that the decision on whether to adopt this plan is made more difficult because players want to get paid. The MLB and MLBPA have agreed on a deal to partial compensation, but if players want to make the full amount that they signed for, then they would need to play.

Fans are itching for live sports to be back in the United States. However, leagues have to figure out what to do in regard to the economics of re-opening without fans.

In baseball alone, ticket sales make up a large proportion of the $10.7 billion pie that the MLB pulls in every year. With that large chunk gone, how will the league make that revenue up?

In my opinion, this wouldn’t be an issue. With absolutely no sports on television, the MLB could host a bidding war between the major networks to put almost every game on national television.

The economics and the time away from families is a unique position for teams. However, these are unique times. Whatever plan Major League Baseball decides to go with to have the sport back, the 2020 season will always have an asterisk next to it.

ESPN insider Jeff Passan emphasized how alien this season could be for one of the most traditional sports in the United States.