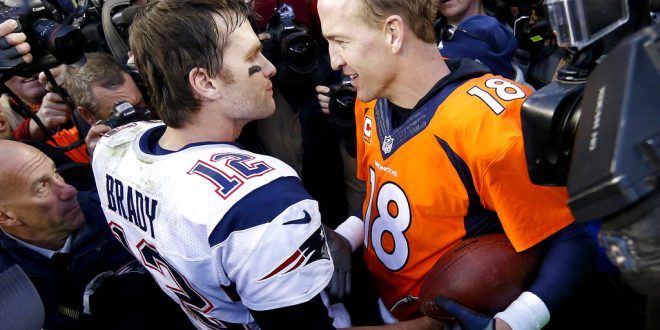 FILE - In this Jan. 24, 2016, file photo, New England Patriots quarterback Tom Brady, left, and Denver Broncos quarterback Peyton Manning speak to one another following the NFL football AFC championship game in Denver. Tiger Woods and Phil Mickelson are ready for a made-for-TV rematch at a time when fans are craving live action. And this time, they'll have company. Turner Sports says Brady and Manning will join them for a two-on-two match sometime in May. Missing from the announcement were such details as when and where the match would be played, except that tournament organizers would work with government and health officials to meet safety and health standards. (AP Photo/David Zalubowski, File)

Some time in May, Tiger Woods and Peyton Manning will face off against Phil Mickelson and Tom Brady in a two-on-two golf match. The match will be aired live on TNT, with all of the proceeds going toward COVID-19 relief efforts. ESPN’s Michael Collins says than in all likelihood, the match will take place on Memorial Day Weekend, and somewhere in the Sunshine State.

Back in 2018, Woods and Mickelson faced off in “The Match.” It was a one-on-one contest between the two golf legends with a $9 million purse. It went to playoff holes, but eventually Mickelson pulled away in Las Vegas at Shadow Creek Golf Course.

In addition to the purse, the two golfers placed multiple side bets throughout the match that went to charity. There is no confirmation that this match will do the same as of yet. However, the name of the contest may hint at the potential for it.

Manning and Woods have played plenty of golf together before already. That is what sparked the desire to put them on a team together to face off against Mickelson and Brady. Manning’s boisterous personality mic’d up with the sometimes aloof Woods will be an interesting dynamic to follow as well.

What makes it different?

Outside of the obvious addition of Manning and Brady to the fold, there are a few key differences between this round and the first.

This time, TNT will carry the event instead of pay-per-view. There were multiple technical difficulties when the event was pay-per-view that are far less likely to happen with a provider like TNT.

Secondly, the players will be mic’d up. This should add an exciting element, as Brady and especially Manning will more than likely bring the event some flair.

It is unknown yet where in Florida this tournament will take place. It is also not for certain Memorial Day Weekend yet. As of now, all that is really known is that the match is for sure happening.

More importantly, it is confirmed that all of the money earned will go towards stopping COVID-19. It is a a way for four of the biggest names in all of sports to help. Even without sports currently happening, athletes are still finding ways like this to help the world fight against this global pandemic.

And, of course, it scratches that sports itch that so many people are currently feeling.

This wasn't a want, it was a need. https://t.co/NSfZA6xaiz