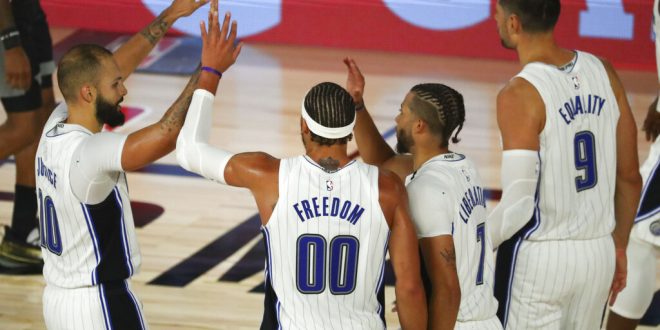 The Orlando Magic need to get back on track. After winning the first two games in style, they’ve fallen flat. They have a chance tonight when they take on the Philadelphia 76ers.

Offense Fell Back to Earth

The Magic were not known at all for their offense before the shutdown. Suddenly, they go and put up 260 points against the Kings and Nets. Not great competition, but they still were not suppose to do that. The Magic are in the bottom five in points per game this season in the entire NBA.

However, that bottom-five offense returned against the Pacers and Raptors. Against the defending-champion Raptors, the Magic couldn’t score 100 points (they got 99).

It doesn’t help that Jonathan Isaac is out and Aaron Gordon is day-to-day.

The Magic actually saw success in the two games against the 76ers in the regular season. In both games, they held Philly to 97 points. In the first game, the Magic beat them handsomely 112-97. The second one was a tight, low-scoring game. The Magic scraped away with a victory 98-97.

Both come into the game missing key players. As mentioned earlier, the Magic are without Isaac and Gordon. The 76ers will be without Ben Simmons. Simmons will be out indefinitely after partially dislocating his knee cap, per Yahoo Sports.

Simmons leads the sixers in rebounds and assists. So, they lost a key player for a good amount of time.

The 76ers are still solid favorites to win over the Magic. The ESPN Basketball Power Index gives them a 59.5 percent chance to win over Orlando. While Philadelphia is also a bottom-third offense, they still have the pieces to outscore the Magic. If the Orlando Magic want to get back to winning, they’ll need to play tight on defense.

Tip-off is set for 6:30 p.m. at the ESPN Wide World of Sports Complex.

Harrison is a sports coordinator at ESPN 98.1 FM/850 AM WRUF. He served as a beat writer for Florida Gators football for the 2019 and 2020 seasons. He also contributes to WRUF's Gainesville Sports Center segments and makes appearances on the Clash on Harp on Sports. Harrison has been a content writer for WRUF since January 2019 as well.
@HarrisonSmaj
Previous 2020 PGA Championship tees off today
Next Florida Ranked Eighth in First Coaches Poll