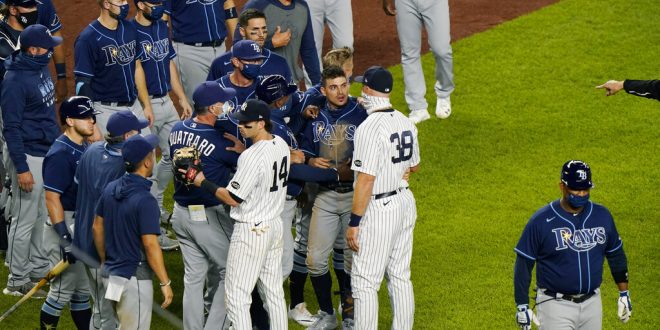 Tampa Bay Rays and New York Yankees exchange words after the Rays' 5-3 loss to the Yankees in a baseball game, Tuesday, Sept. 1, 2020, at Yankee Stadium in New York. Both teams' benches received warnings from the umpires after Yankees relief pitcher Aroldis Chapman threw near the head of pinch-hitter Michael Brosseau during the ninth inning. (AP Photo/Kathy Willens)

On the first pitch of the final out, New York Yankees closer Aroldis Chapman whiffed a 101 mph fastball near the head of pinch hitter Michael Brosseau prompting benches to clear postgame.

After the first pitch of the at-bat, umpires issued both sides a warning to prevent further escalation of the issue. Chapman then struck out Brosseau to record his first save of the season. New York’s win ended a six-game skid against the Rays who lead the American League East by 3.5 games.

As Brosseau swung and missed on the final pitch of the game, he and Chapman proceeded to stare each other down leading to an exchange of words and eventually cleared benches. This is especially interesting as the league is trying to refrain teams from leaving their benches as part of its coronavirus protocols.

Following the game, Rays manager Kevin Cash had some strong words as he thought the whole incident was “absolutely ridiculous.”

“It was mishandled by the Yankees, certainly the pitcher on the mound; it was mishandled by the umpires,” Cash said. “Chapman comes in and he throws three different balls up and in. I get it, they don’t like being thrown up but enough’s enough. We’re talking about a 101 mile per hour fastball over a young man’s head. It just makes no sense; it’s poor judgement, poor coaching, it’s just poor teaching what they’re allowing to do.”

Cash was clearly displeased with how it all played out in his remarks to the media.

"It's poor judgement, poor coaching, poor teaching…" The @RaysBaseball Manager Kevin Cash on the Yankees aiming at the Rays players.

Yankees manager Aaron Boone called Cash’s remarks “a pretty scary comment.” It is certainly and interesting situation all around given the situation of the game. It’s hard to argue why Chapman would put the game in danger at the given point. Two outs in the ninth inning isn’t exactly an ideal time to be messing around with additional baserunners and ejections.

Nonetheless, the game, series and season continues. Tonight’s game will be the final time the two square off in the regular season. This could mean there is some extra drama in store for tonight’s game. The game is scheduled for 7:05 as Jordan Montgomery takes the hill for New York while Charlie Morton gets the nod for the Rays in his return from the injured list.