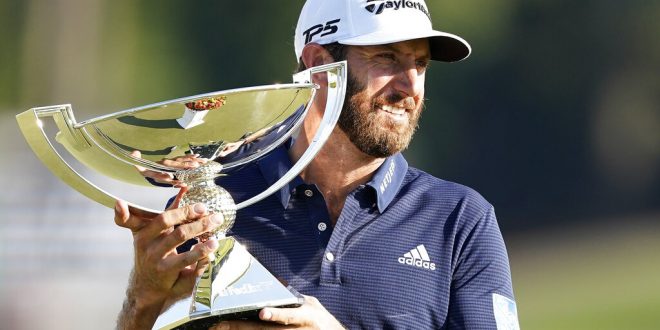 With a win at the TOUR Championship at East Lake Golf Club in Atlanta on Monday, Dustin Johnson has won the FedEx Cup for the first time in his career.

Clinching a win on Monday, Johnson now stands as the champion of the 2019-2020 PGA Tour.

Winning the $15 million purse, Johnson now has 23 PGA Tour wins to his resume, including three in 2020. Two of which came in the FedEx Cup Playoff.

Johnson came into the playoffs with a rank of 15 in the FedEx Cup standings. In the first round of the playoffs, Johnson put up a dominant performance. After losing a heartbreaker to rising star Colin Morikawa at the PGA Championship, Johnson came out determined, shooting -30 in the Northern Trust at TPC Boston.

How dominant was DJ? Harris English shot -19, finishing in second. Johnson won by 11 strokes, skyrocketing to first in the FedEx Cup rankings.

DJ’s success continued in the second round at the BMW Championship. Yet, a -3 tournament at Olympia Fields wasn’t enough to clinch Johnson’s second straight win. Former world number one Jon Rahm dominated on Sunday, shooting -6, which momentarily gave the 25-year-old Spaniard a win.

Still, Johnson wouldn’t go away, sinking a 43-foot birdie put on 18 to push a one-hole playoff. Rahm would go on to win in the playoff.

Still, Johnson enters the TOUR Championship first in the FedEx Cup standings. Being in first, Johnson begins the tournament -10 under par.

DJ took full advantage of this lead, coming out on fire and leading every day of the match. Johnson finished the tournament -21,  shooting -11 on the weekend and clinching his first-ever FedEx Cup championship.

Johnson becomes the 12th golfer ever to win the tour’s top prize, which began in 2007. Winning the FedEx Cup, DJ pockets $15 million and $70 million in bonus cash. Johnson now looks to continue his hot hand in the US Open at Winged Foot on September 17.

The win on Monday gives DJ 23 career tour wins and solidifies his spot at number one in the World Golf Rankings.

The final FedEx Cup rankings can be seen here.

Sam Petosa is a Journalism major pursuing a Specialization in Sports and Media at UF. The South Florida native produces daily shows for WRUF, including "Sport Scene with Steve Russell, and "The Tailgate." In addition, Sam provides weekly sports updates for WUFT News and radio Sportscenter's for WRUF radio. Sam has been a writer at ESPN Gainesville since January 2020.
@sampetosa5
Previous Lightning Take Game One of Eastern Conference Finals
Next Gators Making the Team- NFL Edition