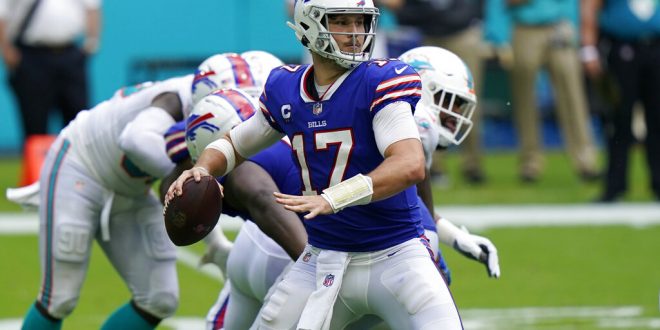 Buffalo Bills quarterback Josh Allen (17) looks to pass, during the second half of an NFL football game against the Miami Dolphins, Sunday, Sept. 20, 2020, in Miami Gardens, Fla. (AP Photo/Lynne Sladky)

Josh Allen amassed 417 yards and four touchdowns through the air to lead the Bills past Miami Sunday. Both of those numbers are career highs for the young signal-caller.

Allen completed 69 percent of passes to eight different receivers. Stefon Diggs was the main beneficiary with eight catches for 153 yards and a score.

With starting linebackers Tremaine Edmunds and Matt Milano sidelined with injuries, Buffalo relied heavily on its offense. Allen managed 249 passing yards and two scores in the first half to give the Bills a 17-10 lead.

Buffalo jumped out to a 7-0 lead after a Reggie Gilliam touchdown capped a 97-yard drive. Then, Devante Parker caught his first touchdown of the year for Miami to even the score.

In the second quarter, Diggs caught his first touchdown since joining the Bills. Allen found him wide open from 22 yards out for the score, and then Diggs emphatically punted the ball into the stands.

Early in the third quarter, the game entered a brief lightning delay. It seemed to be the spark that Miami needed. Jordan Howard eventually punched it in early in the fourth quarter to give the Dolphins a 20-17 edge.

However, coach Brian Flores and the Dolphins made a crucial mistake. Previously in the third quarter, Miami had fourth down on the Buffalo one-yard line. An incomplete pass resulted in a turnover on downs.

With 5:55 remaining in the game, Allen connected with rookie wideout Gabriel Davis to put Buffalo back ahead. Davis made a ridiculous diving grab at the back of the end zone for his first career touchdown.

Soon after, John Brown caught a 46-yard bomb to give Buffalo a 31-20 advantage. Looking for a miracle, Mike Gesicki hauled in a touchdown for the Dolphins with 49 seconds left. The Dolphins made the two-point conversion, but could not come up with the onside kick. It was too little, too late for Miami.

The Dolphins play Thursday night. Miami (0-2) travels to Jacksonville to face the red-hot Gardner Minshew and the Jaguars (1-1).

At 1 p.m. Sunday, Buffalo (2-0) hosts the Los Angeles Rams (2-0). This could be an exciting QB-duel between Allen and Jared Goff while both teams look to remain undefeated.