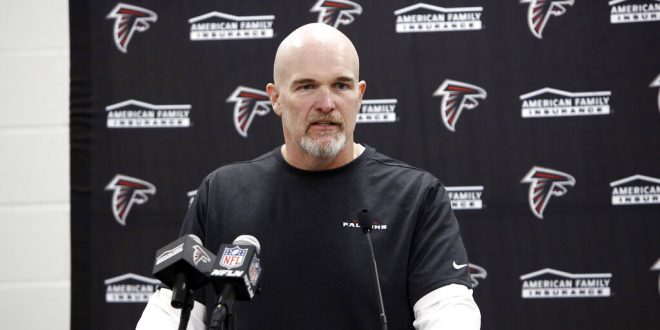 After a disastrous start to their season, the Atlanta Falcons fired head coach Dan Quinn and general manager Thomas Dimitroff. The news followed after a 23-16 defeat to the Carolina Panthers dropped the team to an 0-5 record.

Everyone recalls the embarrassment of Atlanta blowing a 28-3 lead against the Patriots in the second half of Super Bowl LI. The gut-wrenching loss put the franchise hoisting its first Lombardi Trophy on pause. Additionally, the Dan Quinn-led teams’ after their Super Bowl run continued to fold in the clutch.

The Falcons’ lead-blowing history resumed in 2020. Atlanta became the first team to blow multiple 15-point fourth-quarter leads in the same season. The team has done so twice this year in their week two matchup vs. the Cowboys and week three to the Bears. Their curse carries on as the Falcons have yet to “rise up” and figure out how to keep itself ahead until the clock hits zero.

You may be asking yourself how an offense consisting of Matt Ryan, Julio Jones, Calvin Ridley, Todd Gurley and Hayden Hurst aren’t winning games. At the end of the day, it all comes down to coaching. Dan Quinn has failed to utilize his weapons to their strengths. Although All-Pro wideout Julio Jones is hobbled by a hamstring injury, there’s no reason Atlanta’s offensive unit should be amongst the bottom half of the league.

Some may call it a Super Bowl hangover, but these problems have lingered within the organization for several seasons after their 2016 Super Bowl appearance.

Falcons’ signal-caller Matt Ryan’s future remains undecided with the team. Team owner Arthur Blank stated that he hopes Ryan is apart of Atlanta’s plans moving forward. The 13-year NFL veteran has spent his entire career with the franchise, yet his starting spot could be in jeopardy.

Whether or not the problem lies under center or at coaching positions, the Falcons’ front office decided to clean house. Falcons fans believed that Quinn’s six-season stint with the team was long overdue, and were rejoiced to find out he was relieved of his coaching duties.

Meanwhile, Falcons defensive coordinator Raheem Morris takes over as interim head coach. Atlanta looks to earn their first win of 2020 in their battle on the road against the Vikings’ Sunday afternoon.

Angel is a student at the University of Florida. She is a Multimedia Journalist who is currently a Sports Reporter and Writer at ESPN Gainesville. Follow her on Twitter (@angelcwells) and Instagram (@angel_wells). Be sure to follow her NFL Twitter account to stay up to date with the latest NFL news. (@UpToDate1NFL)
@angelcwells
Previous Trask Reflects on Gator Offense
Next Mullen apologizes for wanting to “pack” the Swamp