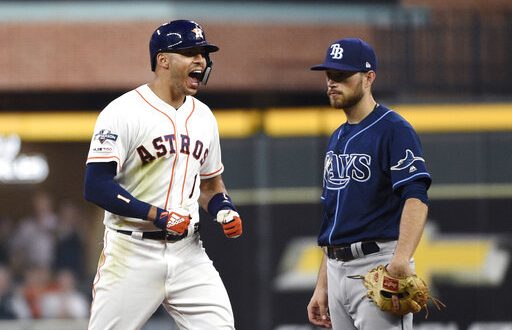 With the score tied at three in the bottom of the ninth inning in a potential series-clinching game five of the American League Championship Series, Rays’ reliever Nick Anderson made a costly, and atypical, mistake with Carlos Correa at the plate.

Anderson, who carried a 0.55 ERA through 16 1/3 innings of regular season baseball and a 3.24 ERA through five postseason appearances, missed his location with a 96-mph fastball.

Instead of hitting the far, low corner of the plate with his scorching fastball, his pitch sailed into the far, high portion of the strike zone. And unfortunately for Anderson, that’s where Correa wanted to see the pitch.

With the bases empty, the Astros’ shortstop sent the pitch on a 416-foot ride to straightaway center field and delivered Houston a much-needed 4-3 victory to keep its season alive.

After surrendering a booming 406-foot home run to Astros’ leadoff man George Springer, the Rays were forced to play catch-up. And they did not shy away.

George Springer is just simply one of the greatest Postseason hitters of all time.

After Tampa Bay’s opener, John Curtiss, settled down and retired five of Houston’s next six batters, the Rays evened things up.

Brandon Lowe, who entered the game hitting just .119 this postseason, sent a poorly placed Blake Taylor fastball for a 406-foot ride over the centerfield wall in the top of the third inning.

But the score would not remain tied for long, as the Astros got to Tampa Bay’s bulk guy Josh Fleming for two runs in the bottom of the third inning.

The runs came after Josh Reddick reached on a leadoff single and Martin Maldonado doubled. With the runners on second and third, Michael Brantley singled to right to bring Reddick and Maldonado home for a 3-1 lead.

Tampa Bay continued to fight back, however, as postseason hero Randy Arozarena smashed his third home run of the series — and sixth of the postseason — to cut the deficit to 3-2 in the top of the fifth inning.

If Twitter is down, does Randy Arozarena make a sound?

That score would remain intact until the top of the eighth inning when Rays’ first baseman Ji-Man Choi golfed a 447-foot no-doubt home run into the vacant right-field seats.

With three different solo home runs, the Rays had evened the score at three.

But their heroics would not carry into the ninth inning.

After a Mike Zunino leadoff single in the top of the ninth, which led to a Kevin Kiermaier pinch-running opportunity, the Rays failed to convert.

The man who scored the Rays’ first run with a solo home run, Brandon Lowe, struck out on three near-identical pitches in a four-pitch at-bat.

These are three different pitches

However, a wild pitch gave Kiermaier second base. And with a man in scoring position, postseason hero Randy Arozarena just missed on a slider over the middle of the plate and flew out deep to right field. Austin Meadows also failed to break the tie, as he quickly flew out to George Springer in center field.

To advance to the World Series, the Rays’ starting pitching needs to return to form. With ace Blake Snell scheduled to take the mound Friday night, Tampa Bay hopes to avoid a Game 7 in a series they previously led 3-0.

Houston, meanwhile, hopes to become just the second MLB team ever to win a playoff series after trailing three games to none.

The only team to complete that feat to this point: the 2004 Boston Red Sox, who erased the New York Yankees 3-0 lead in the ALCS before winning their first World Series in 86 years.

But before the Astros achieve that piece of history, they need to win Game 6. And with Framber Valdez set to make just his fourth career postseason start, the Astros will hope to get off to a fast start, as they did in games four and five.