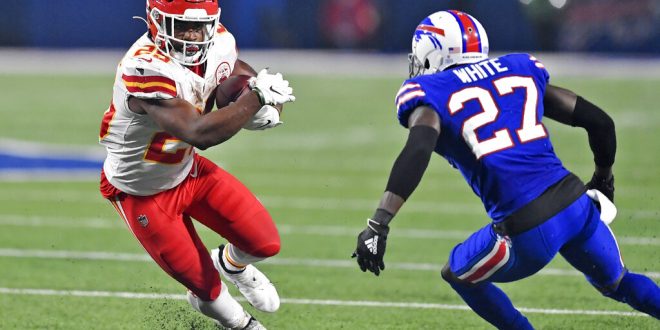 The Kansas City Chiefs turned to the running game to defeat the Buffalo Bills 26-17 on Monday night.  The Chiefs are now 3-0 in Monday night matchups.

The  Chiefs are now 5-1 as they were able to bounce back from a 40-32 loss against the Las Vegas Raiders. This is their third 5-1 start in four seasons.

Meanwhile, the Bills have now lost two games in the row. Their first loss was courtesy of the Tennessee Titans last Sunday.

The Bills started off good as they were able to battle Chiefs quarterback Patrick Mahomes‘ passing game. The reigning Super Bowl MVP only went 21-of-26 with two first-half touchdown passes — both to tight end Travis Kelce.

The Chiefs quickly turned to their running game once they saw that their passing game was not as efficient.

This resulted in a total of 245 rushing yards, the most since Mahomes took over as the starter in 2017. Chiefs rookie running back Clyde Edwards-Helaire led his team in rushing yards, getting 161 of those 245.

The Chiefs’ offense was quick to notice the efficiency of the Bills’ defense to control the passing game.  Mahomes said that they knew they had to change their game strategy and that they have the manpower to make the switch.

The Chiefs also had 46 rushing attempts, which is the most in eight years under coach Andy Reid.

Taking it back to college

Rushing the ball was not something that was unfamiliar for the two players that shined in this game. Mahomes and Edwards-Helaire are more than familiar with running these type of plays.

Edwards-Helaire is fresh on the running game, as he joined the Chiefs this year after a historic performance at LSU. In his sole season as a starter for the Tigers, he finished with 1,414 rushing yards and 453 receiving yards on 55 receptions.

As for Mahomes, the switch to a running game brought him flashbacks of his days at Texas Tech were he also had to make the switch a few times.

“It takes me back to my college days at Texas Tech when we’re getting [eight defenders in pass coverage] and the linebackers are 6, 7 yards deep,” Mahomes said. “If teams are going to do that, we’ve got to run the football until they come up, and when they come up, we’re going to throw the football again.”

Once again, the young quarterback broke another record. During the Chiefs-Bills match up, Mahomes reached 90 passing touchdowns on his career. This was achieved during his 37th game.

This broke the Super Bowl era record for the fewest games to reach 90 passing TD’s. Before Mahomes, Hall of Famer Dan Marino held the title with 40 games.

The Chiefs will travel to Denver on Sunday to face the Broncos. The Broncos are coming into the game with a big win against the New England Patriots. Kickoff is set for 4:25 pm.

As for the Bills, they will play against the New York Jets on Sunday. The Jets will try to get their first win of the season. Kickoff is set for 1 pm.

Camila is a senior at the University of Florida, who served as a beat writer for the women's basketball team from 2019 until the 2021 season. She was also a beat writer for the Gators football team during the 2020 season. Camila is also WUFT's news director as well as a sports reporter/anchor.
@CamilaMaffuz
Previous The Arizona Cardinals take on the Dallas Cowboys in Monday Night Footbal
Next Cowboys’ turnovers leads to big win for Cardinals