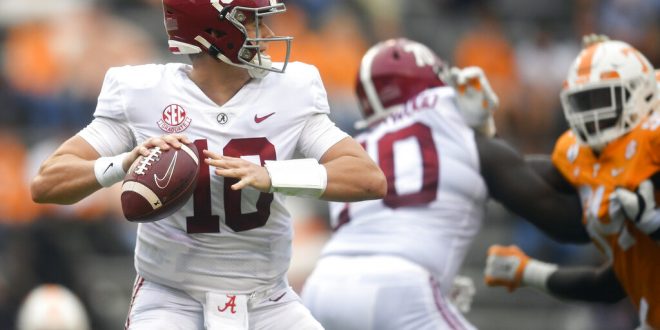 All Around the SEC: Week 8

Junior Alabama wide receiver Jaylen Waddle had a shocking injury on the opening kickoff. Waddle injured his ankle and may miss the rest season. Alabama head coach Nick Saban compares the injury to that of former Alabama running back Kenyan Drake in 2014 that caused him to miss most of that season.

With the loss of Jaylen Waddle, sophomore wide receiver John Metchie III stepped up recording seven catches for 151 yards. Senior running back Najee Harris also showed out with 96 yards on the ground and three touchdowns.

Tennessee was not as successful on the run but played well in the passing game with their two touchdowns coming in the air.

Nick Saban enters his birthday week beating Tennessee for the 14th straight time while maintaining an undefeated (23-0) record against his former assistants. pic.twitter.com/qFAGaxQkaq

Auburn won over Ole Miss 35-28 in a much-needed win to go back above .500 on the year. Many fans, however, thought that the game was gifted to Auburn with a bad call by the officials.

Both teams scored consistently on the ground with seven combined rushing touchdowns out of nine total touchdowns.

A back and forth game with lots of offense. Ole Miss has the second-best offense in the SEC in terms of yards per game only behind Alabama. Ole Miss also give up the most points and yardage per game in the SEC.

This game was controlled by Missouri’s offense in a 20-10 win over Kentucky. Missouri held the ball for more than two-thirds of the game. Missouri ran 92 total plays to Kentucky’s 36.

Even with the low amount of plays, Kentucky’s offense left a lot to be desired. Kentucky completed just four passes for 47 yards and one touchdown.

With that terrible passing performance, the Wildcats now become the worst passing team in the SEC for passing yards per game with only 123.4 passing yards a game.

LSU debuted their freshman quarterback TJ Finley against South Carolina because of an injury Myles Brennan previously suffered. Finley played well in his first college football start recording 265 passing yards, two passing touchdowns, one interception and a rushing touchdown. Finley lead the Tigers to a 52-24 win over the Gamecocks

Sophomore running back for South Carolina Kevin Harris ran the ball very well. Harris ran for 126 yards and two touchdowns. Harris has emerged as a quality starting running back this season with 634 total yards from scrimmage and nine total touchdowns in just five games this season. He is second behind just Alabama’s Najee Harris in both rushing yards and rushing touchdowns.

South Carolina’s quarterback, Collin Hill played decently but left a lot to be wanted with his performance. Hill threw for 234 yards, one touchdown and one interception. He could not, though, get anything against two of LSU’s defensive backs. Hill did not complete a pass when passing to a receiver guarded by either of LSU’s Derek Stingley or Eli Ricks.

SEC games this upcoming week include:

Jensen Young is a journalism student at the University of Florida. He works as a sports writer for WRUF.com and is the voice of trendings on Wednesday mornings on the WRUF radio station.
@Jensen_Young9
Previous Eastside Receiver Ethan Grand Named National Merit Semifinalist
Next Bears, Rams meet in Monday Night Football