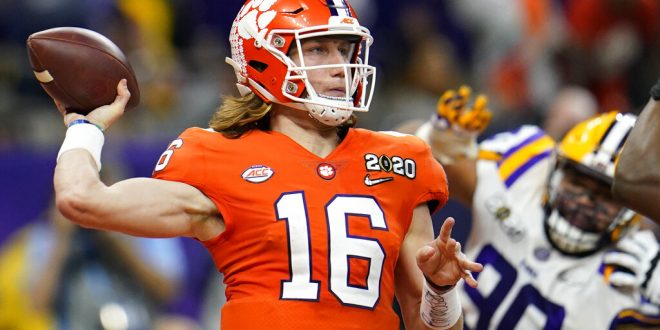 Clemson quarterback Trevor Lawrence passes against LSU during the first half of a NCAA College Football Playoff national championship game Monday, Jan. 13, 2020, in New Orleans. Georgia Tech will play at home against the nation's top-ranked team for the first time in 40 years when No. 1 Clemson, let by the high-profile tandem of quarterback Trevor Lawrence and running back Travis Etienne, puts its perfect record on the line on Saturday, Oct. 17. (AP Photo/David J. Phillip, File)

Trevor Lawrence to stay at Clemson?

Clemson Tigers quarterback Trevor Lawrence has been pegged as the next NFL star since his freshman year of college. As a result, many assumed he would leave college as soon as he legally could. However, Lawrence hinted Tuesday that might not be the case.

The potential No.1 overall pick in the 2021 draft has thrown for nearly 9,000 yards and 83 touchdowns to just 14 interceptions in his college career to this point.

Lawrence is currently projected to go to the New York Jets in the draft, the only winless team in the NFL at this point. The Jets drafted their current quarterback Sam Darnold third overall in 2018 but he has struggled. The former USC Trojan has 39 touchdowns and 34 interceptions in two and a half seasons as New York’s starter.

“For me, it’s out of my control,” Darnold said last week. “I’m here to do my best and help this team win games.”

If Trevor Lawrence were to enter the 2021 NFL draft, he could be in danger of suffering from the same fate as Darnold. The Jets set up Darnold to fail, with limited talent plus a below average coaching staff. Many, including former Gator quarterback Tim Tebow, believe Lawrence should consider all options.

In an interview on the CBS Sports radio show Tiki and Tierney, Tebow said that Lawrence should figure out how the Jets plan to use and support him.

“If I was him, I would genuinely try to evaluate everything and look at it with open eyes,” Tebow said. “Because he’s so good and he’s so talented and he’s a great prospect, he will have leverage.”

Michael Hull is a sophomore at the University of Florida and is currently studying Journalism & Sports and Media.
@Michael_Hull33
Previous Los Angeles Relishes a Dodgers World Series Win
Next Tampa Bay Rays Proud of Great Season Despite Loss in World Series