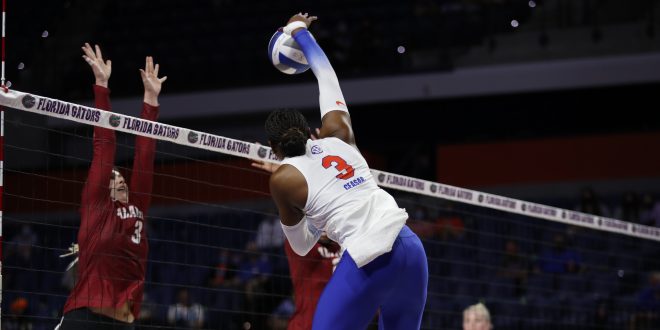 The Gator volleyball team drops their first match of the season to the South Carolina Gamecocks after a tightly-contested five-set match.

Florida moves to 5-1 on the year, with only two matches left to play this season.

The first set was a tight matchup between both teams, with 12 ties before the media timeout. South Carolina took the first set 25-21, but Florida answered with a 25-17 win in the second set.

The Gators hit a stellar .414 in the second set with T’ara Ceasar and Thayer Hall posting four kills apiece.

The Gators took the 2-1 match advantage after a 25-21 victory in the third set but fell to the Gamecocks 25-13 in the fourth frame to force a deciding fifth set. South Carolina took the final 15-point set holding the Gators to only 12 points.

Florida now drops to 59-8 in the all-time series against South Carolina. The Gators also move to 4-2 against the Gamecocks in five-set matches.

Despite the loss, Florida’s offense continues to break records.

Thayer Hall led Florida’s offense racking up 20 kills in the five-set match. Hall is the only Gator to record 20 or more kills. The last time Hall completed 20 or more kills was November 17, 2019, in a match again Kentucky when she registered a record 22 kills.

Also, T’ara Ceasar added 18 kills herself in today’s match, along with a team-high 14 digs for her first double-double of the season.

Three additional Gators recorded double-digit digs in the match. Paula Cerame had 11, Ellie McKissock had 12 and Marlie Monserez recorded 11 digs for her second double-double of the season along with dishing out 48 assists.

As a team, the Gators registered 10.0 blocks led by powerhouse at the net Lauren Dooley.

Volleyball season is rapidly coming to a close, and Florid is looking to bounce back next week.

The Gators officially close out their 2020 season back in the O’Dome when they welcome the Georgia Bulldogs on November 20 and November 21.

The Gators hold a record 66-9 series advantage over the Bulldogs, including a 63-1 record under Mary Wise.