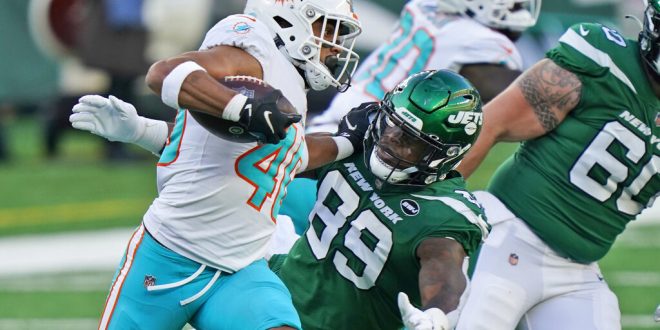 With Tua Tagovailoa sidelined with a left thumb injury, the Dolphins turned to Ryan Fitzpatrick to play quarterback Sunday. He wasn’t great, but he was good enough.

Miami rolled to a 20-3 win over the winless New York Jets following another dominant performance from its defense. In two games against the Jets this season, the Dolphins allowed just three points.

Since the defense only yielded three points on an early field goal, Fitzpatrick faced little pressure to perform well. But he did. The former Jet was 24 of 39 for 257 yards with a pair of passing scores and no interceptions.

He was in sync with DeVante Parker throughout the game. The wide receiver went off for a season-high 119 yards on eight catches.  Fitzpatrick also connected with his tight ends. Mike Gesicki and Adam Shaheen caught his two touchdown throws to give Miami a comfortable lead down the stretch.

DeAndre Washington led the Fins in rushing for the first time since joining the team. The former Kansas City Chief rushed for 49 yards with Myles Gaskin and Salvon Ahmed out because of injuries.

Jets quarterback Sam Darnold’s right shoulder injury has hindered him since Week 4. It caused him to miss two games, but he made his return to the field against the Dolphins.  Miami had troubled him in the past as he was 1-4 versus the Fins with four touchdown passes and eight interceptions in his short career.  And his struggles continued Sunday.

He could not find the end zone and the Dolphins picked him off twice. Xavien Howard sealed the game by jumping a route and recording his NFL-leading seventh interception.

The Jets (0-11) host the Raiders (6-5) Sunday. Even though Las Vegas suffered an embarrassing 43-6 loss to the Falcons, it will take a miracle for the Raiders to fall to the Jets. New York is poised to grab the first overall pick and perhaps nab Clemson QB Trevor Lawrence in the 2021 NFL Draft. 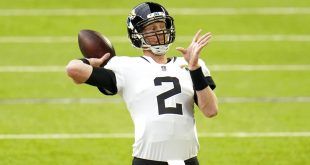 Injuries have struck few teams harder than Miami, with the team’s quarterback room taking the …