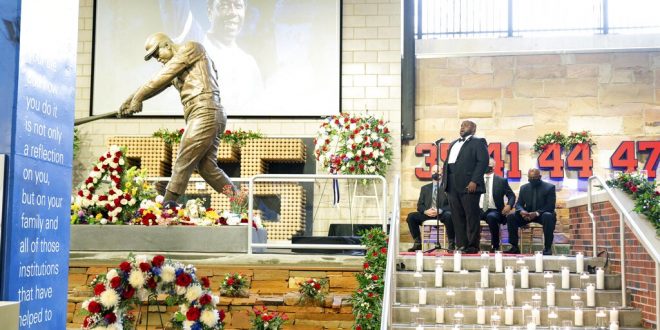 Timothy Miller, an operatic tenor, performs the song "Amazing Grace" during "A Celebration of Henry Louis Aaron," a memorial service celebrating the life and enduring legacy of the late Hall of Famer and American icon, on Tuesday, Jan. 26, 2021, at Truist Park in Atlanta. (Kevin D. Liles/Atlanta Braves via AP Pool)

A small crowd gathered at Truist Park in Atlanta on Tuesday for a memorial honoring baseball legend Hank Aaron.

Aaron passed away last Friday, peacefully sleeping in his Atlanta home at the age of 86.

Tributes poured in from across the baseball world for Aaron. People reminisced on his achievements on the field, and more importantly, his selflessness and strength off the field.

Among those who spoke at Aaron’s memorial were Hall-of-Famer Chipper Jones, MLB commissioner Rob Manfred and Braves manager Brian Snitker.

Today we say goodbye to @HenryLouisAaron. The home run king will be laid to rest in southwest Atlanta. A private memorial service was held yesterday at @TruistPark. Braves legends shared memories and talked about the impact Hank Aaron had on their lives. @GoodDayAtlanta pic.twitter.com/6Q5cSbiqoC

As incredible as Aaron’s baseball accomplishments were, they paled in comparison to who he was as an individual. Speaking at Aaron’s memorial, MLB commissioner Rob Manfred echoed that sentiment.

Aaron played more than two decades in the MLB, almost all with the Braves. On the path to achieving unprecedented success, he faced overwhelming adversity because of his skin color. Former Braves player and Hall-of-Famer Chipper Jones spoke about Aaron’s strength and resilience in the face of that adversity.

Many more of Aaron’s friends, family and former teammates who couldn’t attend the memorial in-person sent in video tributes.

A Career of Perseverance

Despite the verbal harassment and death threats that Aaron received, he shrugged it off and played with the utmost grace.

Aaron compiled one of the most successful careers in baseball history. He still holds the records for most career RBIs, most career bases and most career all-star appearances.

Additionally, Aaron ranks second all-time in career home runs. Some baseball critics still view him as the true home run king, with the current leader Barry Bonds overlooked because of steroid use.

Aaron persevered through decades of injustice, and is one of the most important civil rights icons in sports history. His life, legacy and contributions to the world will live on forever.

Hank Aaron was one of a kind. pic.twitter.com/jfMKwwt0oV