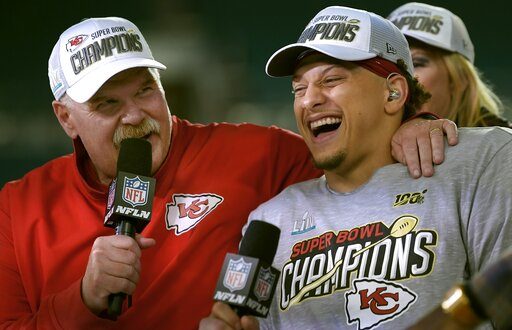 Andy Reid has been good throughout his NFL coaching career, which includes 14 years with the Philadelphia Eagles and eight years with the Chiefs. After beating the San Francisco 49ers, 31-20, in Super Bowl LIV at Hard Rock Stadium, Kansas City players talked about how much they enjoyed helping longtime NFL head coach Andy Reid win an elusive NFL title at long last.

One of the most defining changes for Super Bowl LV is going to be the lack of people screaming and cheering in the stadium. Having a large crowd typically has an enormous impact on a football team when they are choosing among many quick-time decisions. However, Reid mentions that even though a smaller attendance might not have as great of an effect as Super Bowl LIV’s did, the idea of playing in the Super Bowl is still great enough to loom over them.

Why Chiefs Have No Super Bowl Hangover

The Kansas City Chiefs won Super Bowl LIV, but will that have an effect on the team for Super Bowl LV? Reid states that the Chiefs will not have to worry about a Super Bowl hangover as one of their greatest strengths is the connection that they have between players within the organization. It starts with Clark Hunt, who is the owner of the Kansas City Chiefs, and it filters down from there and the respect that people have for each other is far too great to be diminished.

Difference In Brady Since Facing Him In 2004 Super Bowl

Things will be tough for Andy Reid and the Chiefs as Tom Brady, who is playing his 20th season at age 43, was able to bring the Tampa Bay Buccaneers to the Super Bowl since their last appearance in Super Bowl XXXVII. Reid mentions that Brady is a great guy and admires him for staying “football young.” Reid also mentions how Brady is able to keep the same motivational drive that helped him win in his first Super Bowl appearance back in 2002.

Andy Reid has went from being frequently criticized for his overly-cautious decisions, especially during crucial points of games, into one who has become aggressive with key calls that helped win last season’s Super Bowl. If the Super Bowl comes down to a fourth-down decision from either of the two teams, the numbers point towards Kansas City as Andy Reid is more likely to make the correct decision.