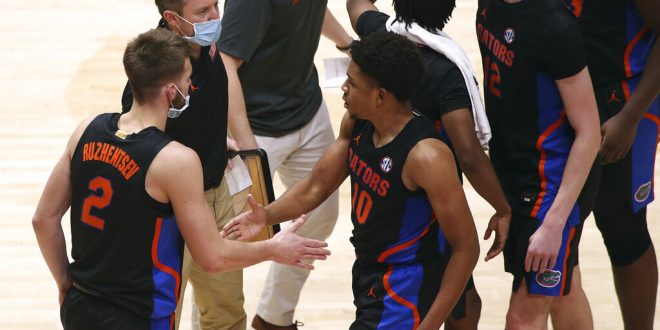 The Gators, on a four-game win streak, have pulled off recent upset wins against Tennessee and West Virginia. This success carried the Gators into the national rankings for the first time this year, currently ranked No. 22.

Losing four of their last five, the Gamecocks are one of the many teams facing COVID-19 struggles this year. They will look to overcome those struggles and gain some energy here in the later part of the season.

Live coverage of the game will begin on our ESPN station at 5:55.

Gators On a Roll

Despite losing Keyontae Johnson to injury, Florida continues to make a statement in the SEC. After a bumpy start losing three conference games in early January, the Gators finished the month on a four-game win streak, including wins against high-ranked Tennessee and West Virginia teams.

Junior forward Colin Castleton continues to play at a high level, averaging 13.4 points per game and shooting nearly 64% from the field. Castleton also dominates the boards for Florida with a team-high 5.5 rebounds per game and has posted an impressive 2.3 blocks per game.

Sophomore guard Tre Mann leads the Gators in scoring this season, averaging 14.3 points per game. Mann’s ability to create additional scoring opportunities is another benefit, as well as his improved three-point shooting.

With the chemistry flowing among the Gators, they continue to win and rise in the national spotlight.

The Gamecocks were among the programs hit hard by the impacts of COVID-19 this season. They faced several game cancellations in December and had to postpone team activities. When it seemed they were healthy and ready to move on, head coach Frank Martin tested positive for COVID-19 a second time.

Upon returning to play, the Gamecocks struggled mightily, with the sole highlight being a victory over Georgia. The frustration displayed in their recent games against Auburn and Vanderbilt is alarming.

Returning juniors AJ Lawson and Keyshawn Bryant have been the offensive spark for South Carolina so far this season. As the team gets healthier and chemistry improves, look for those two to step up as leaders on the team.