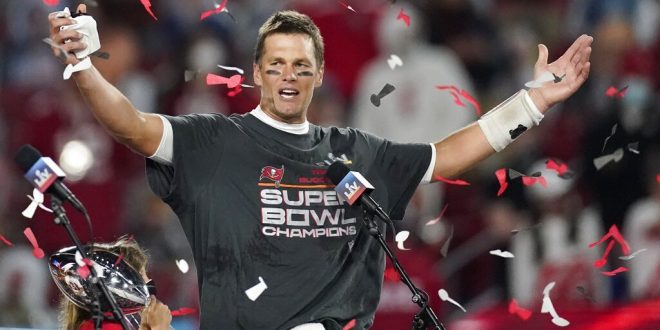 The Tampa Bay Buccaneers have done it. They are officially world champions for the second time in franchise history. The team will enter the 2021 with colossal expectations as defending champions. Can the team once again live up to the hype and return to the NFL’s biggest game?

Bucs’ quarterback Tom Brady is not done just yet. Brady confirmed after Sunday’s game that he will be returning in 2021 for his 22nd season. And his eyes are still set on another Lombardi Trophy.

With seven-time Super Bowl champion Tom Brady on your team, you have a proven leader. Bucs star linebacker spoke for many of his teammates in saying that Brady is a player everyone wants to play with.

Former Patriot teammates tight end Rob Gronkowski and wide receiver Antonio Brown joined Brady in Tampa. Both caught touchdown passes Sunday — Gronkowski had two — and made a significant impact on the team’s success and moral. The leadership Brady brings to team can not be understated.

Wherever Brady goes, success follows. Another year with Brady in Tampa Bay likely means another successful year for the Bucs.

The Players Are Not Satisfied

That’s right. Even the 43-year-old, seven-time Super Bowl Champion Brady is not yet satisfied. The issue for the rest of the league? Brady’s not alone.

A pair of Buccaneers’ running backs made their desire to “run it back” quite clear. Third-year back Ronald Jones spoke earlier today about running it back next year.

The NFL’s leading rusher in the playoffs, Leonard Fournette, took to Twitter to share his thoughts on next season.

Should we run it back @Buccaneers????? pic.twitter.com/XH0pw2lG9d

Another Bucs weapon, leading receiver Mike Evans, also plans on contributing to the cause. Peter King of NBC Sports reports Bucs’ head coach Bruce Arians called Evans, “The most unselfish superstar I’ve ever met.” Arians said that Evans told him to use some of his money to help keep the team intact.

The selflessness of one player can create a domino effect in the organization. Soon, players hungry for another ring will follow suit in an effort to keep impending free agents on the roster.

Notable #Bucs players scheduled to be free agents this offseason:

Most of the players have expressed interest in coming back.

The players in the locker room are ready and willing to make sacrifices for the greater good of the team. They’re ready to do what it takes recapture the title.

With all head coaching vacancies filled around the league, it appears Bucs defensive and offensive coordinators, Todd Bowles and Byron Leftwich respectively, will return next season.

Both Bowles and Leftwich had brilliant game plans that foiled the mighty Kansas City Chiefs on both sides of the football. Bowles, who interviewed with Philadelphia Eagles for their head coaching vacancy weeks ago, has been lauded for shutting down the Chiefs’ prolific offense.

Chiefs’ head coach Andy Reid had similarly high regard for Bowles saying, “give credit to Todd for the job that he did. He got us.”

The Chiefs offense averaged 29.3 points per game this season, scoring less than 20 points just once all year (Week 16 vs. Falcons). Bowles’ defense held them to just nine.

With both coordinators and most of the roster likely to return next season there is no reason to believe that the Tampa Bay Buccaneers can’t run it back in 2021.

Will Levenson is a Journalism and Sports Media major at UF. He produces daily shows for WRUF, including "Sport Scene with Steve Russell," "Harp on Sports," and "The Tailgate." In addition, Will provides weekly sports updates for WUFT News and radio Sportscenters for WRUF radio. Will has been a writer at ESPN Gainesville since September 2019.
@BigWillLevenson
Previous Tampa Bay Lightning Continues to Dominate
Next Chiefs, Mahomes Preseason Favorite to Win Super Bowl 56