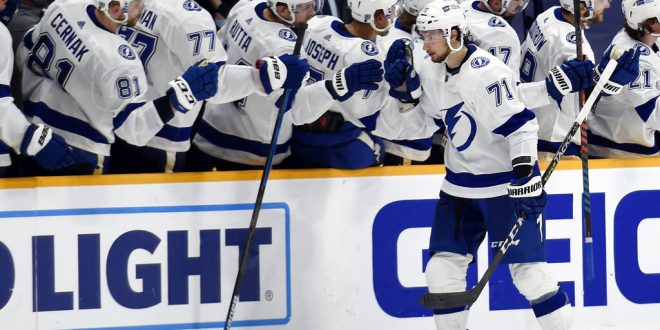 Tampa Bay Lightning center Anthony Cirelli (71) is congratulated after scoring a goal against the Nashville Predators during the second period of an NHL hockey game Monday, Feb. 8, 2021, in Nashville, Tenn. (AP Photo/Mark Zaleski)

The Tampa Bay Lightning (8-1) continue to dominate with a 4-1 win against the Nashville Predators (5-7) yesterday. Giving the Lightning their fifth win in a row.

During the 1st period, Anthony Cirelli started the game with a goal assisted by Alex Killorn and Erik Cernak giving the Lightning the lead of the game. With no response from the Predators, the 1st period ends with a score of 1-0.

Cirelli continued to stay hot with a power-play goal assisted by Mikhail Sergachev and Pat Maroon in the 2nd period. Giving the Boltz a score of 2-0 at the end of the 2nd period.

The Predators then respond in the 3rd period with a power-play goal scored by Dante Fabbro assisted by Mikael Granlund and Matt Duchene, giving the Predators their first goal of the game making the score 2-1. The Lightning then strike back with another goal scored by Blake Coleman making the score 3-1. Steven Stamkos then continues to add to the score with a goal assisted by Brayden Point giving the Lightning another point and a final score of 4-1.

Stars of the Game

Cirelli was one to watch last night with two goals scored and four shots.

Why stop at one? pic.twitter.com/RoXkCW9LlW

Curtis McElhinney was also a main contributor to the Boltz win with 23 saves throughout the game.

Pekka Rinne from the Nashville Predators was another to watch with 31 saves throughout the game.

The Tampa Bay Lightning look for another win against the Nashville Predators tonight at 8:30 p.m.